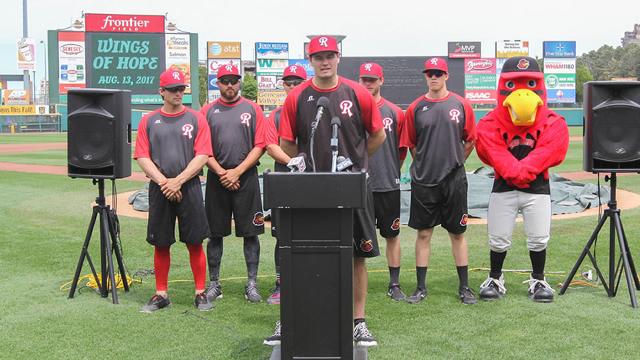 Rochester Community Baseball, the Rochester Red Wings, Sharing Kindness, Inc., and Villa of Hope held a press conference to announce a new initiative, “Wings of Hope” to raise awareness of suicide risk factors, suicide prevention and community resources for treatment. A special day at the ballpark has been scheduled for Sunday, August 13.

Dan Mason, General Manager of the Rochester Red Wings and Villa of Hope President and CEO, Christina Gullo was joined on May 24 by Red Wings players Jason Wheeler, John Ryan Murphy, D.J. Baxendale, ByungHo Park, Trevor Hildenberger, and Alan Busenitz. Wheeler spoke on behalf of his teammates and shared his experience demonstrating the importance of this partnership.

Jason Wheeler and his family know the effect suicide has on a family, “Mental illness and suicide have personally affected me and my family. We lost my 16 year-old brother-in-law Jeremy, almost eight months ago. Since this tragedy, we have been astonished at not only how common mental illness and suicide are, but also how unable we are as a society to speak about them because of the strong stigma associated with these issues. As a family, we are working towards eliminating stigma surrounding suicide, and changing the perception in our communities that mental illness is different from any other illness. We feel very fortunate to be partnering with the Red Wings and Villa of Hope to help raise mental health awareness, improve education, and start an ongoing conversation about suicide, both in the Rochester community and nationwide.”

Dan Mason, General Manager of the Rochester Red Wings shares, “We are fortunate to have great players on our team but even more fortunate that these young men are outstanding citizens who want to make a difference in the lives of other people. It is atypical for a minor league baseball player to sponsor a promotion for his team and we are thrilled that Jason is partnering with us and our friends at the Villa of Hope to help raise awareness and funds for suicide prevention and mental health. This is a very personal matter for he and his family and everyone at Rochester Community Baseball applauds and supports him for using his status as a professional baseball player to raise awareness and funding for such an important topic in our society today. ”

Five months ago, Villa of Hope moved into its new, larger Behavioral Health (Mental Health and Chemical Dependency) Outpatient Clinic at Water Tower Park in response to the rapidly growing need in the Rochester area. Christina Gullo, President and CEO of Villa of Hope states, “Twelve percent of children under the age of 18 have considered suicide in the past year and seven percent attempted it. S uicide is the second leading cause of death for young people ages 15 to 24. As a community we need to have the resources for parents and kids to find help before these become life-altering or life-threatening events.”

Special Red Wings jerseys, hats, socks and Minnesota Twins collectibles will be available for auction at the Sunday, August 13th game at 1:35 p.m. All proceeds of the auction will benefit Villa of Hope and Sharing Kindness, Inc. That game is a designated “Kids Club Day” and will include sports entertainer “BirdZerk!” and a chance for kids to run the bases with Spikes and Mittsy after the game.

Sharing Kindness is a newly-formed non-profit, started by the Walters family after the death by suicide of their 16 year old son Jeremy, in October of 2016. It is dedicated to overcoming the stigma surrounding mental illness, depression and suicide. Sharing Kindness is about having the courage and compassion to start and sustain the conversation in our communities about these issues that have traditionally been so difficult to talk about. We are currently developing and helping fund various awareness and education programs in the lower and outer towns of Cape Cod, MA, an area plagued with higher than average rates of suicide, with special focus on our schools.

About Villa of Hope