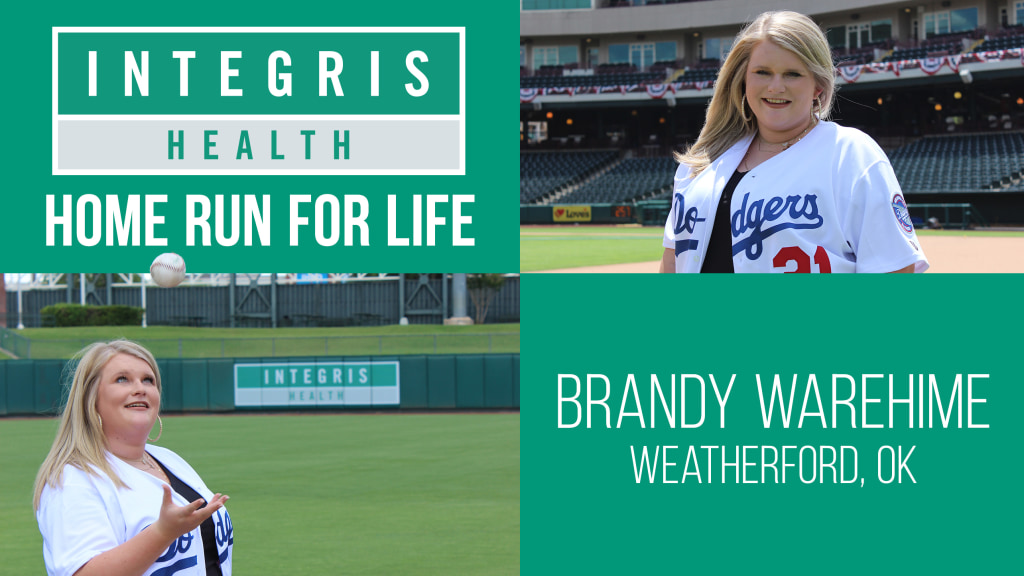 While driving on the John Kilpatrick Turnpike in March 2018, Warehime lost control of her car and spun three times before her car rolled four times. The then-24-year-old was ejected from the vehicle and thrown about 70 feet, suffering extensive injuries.

Her journey to recovery involved almost three months in hospitals and care centers, concluding with three weeks at INTEGRIS Jim Thorpe Rehabilitation where she started to resume everyday activities before finally returning home.

“My learning and starting to live life normal were all done at Jim Thorpe,” she said. “I remember my first therapist helping me put on a pair of pants, which seems so small, but at the time it was such a big thing because I hadn’t had pants on in a long time. I remember getting to stand up and getting to learn how to walk and start doing all the things that were normal and I wanted to be back to myself as soon as possible.

“The words thank you can never be enough to every single therapist that helped me along the way.”

“Home Run For Life” recognizes individuals in the Oklahoma City community who have overcome a significant medical event with the help of their families, physicians and health care professionals. To symbolize the end of their battle against adversity, honorees take a prerecorded home run “lap” around the bases during an in-game ceremony.

“’Home Run For Life’ allows us to uniquely recognize some amazing Oklahomans who have endured significant health challenges,” OKC Dodgers President/General Manager Michael Byrnes said. “Each month during the baseball season, we are proud to partner with INTEGRIS Health to honor the perseverance and courage displayed by these individuals and to help inspire others with their incredible stories.”

She was ejected from the vehicle and thrown about 70 feet, breaking her clavicle, scapula, pelvis, 12 ribs and her femur. She shattered her back and thoracic spine. She suffered a stroke, coma and a traumatic brain injury.

During surgery, doctors learned she had a stroke. Then following the surgery she didn’t wake up for eight days.

At INTEGRIS Jim Thorpe Rehabilitation, she re-learned how to do everyday activities like put on clothes and shower.

Warehime said she never wanted to stop trying. She never missed a therapy session and persevered.

“I just kept going and kept trying,” she said. “All of my therapists, we’re still friends to this day. They were incredible people and that’s why I get to be where I am right now.”

Now more than three years later, Warehime is enjoying life with a new perspective thanks to the care she received at INTEGRIS Health. She married her husband Jake in June 2020 in the midst of the COVID-19 pandemic and the couple is now expecting their first child.

“Life has changed a lot since my accident,” Warehime said. “You enjoy the little things, so I take life a little bit slower…Find time to (do things) because you are not promised tomorrow…Now we are so excited because we will be welcoming our sweet little baby in February.”

To read Warehime’s full story, visit the OKC Dodgers’ “Beyond the Bricks” website at: medium.com/beyond-the-bricks.

The OKC Dodgers continue their homestand and open a six-game series tonight against the Sugar Land Skeeters at 7:05 p.m. at Chickasaw Bricktown Ballpark. Promotional highlights of the series, include:

• Friday: Loop Rawlins will perform his one-man Wild West show, presented by Heartland Flyer. The trick roper, whip cracker and gun spinner will perform a variety of jaw-dropping feats throughout the night. Fireworks are scheduled to follow the 7:05 p.m. game.

• Saturday: Enjoy the OKC Dodgers’ 6:05 p.m. game before taking in a postgame concert by Crowder presented by Scott Dawson Evangelistic Association on Faith and Family Night. Groups of 10 or more will receive a special rate and an OKC Dodgers hat in addition to the postgame concert. Also during the game, the INTEGRIS Home Run For Life series continues, featuring July’s honoree Warehime.

• Sunday: Kids can run the bases following each Sunday home game throughout the Oklahoma City Dodgers’ season. First pitch is scheduled for 6:05 p.m.

• Tuesday: Throughout the season, $2 Tuesdays feature $2 select beer, soda and bottled water from a line of Budweiser and Pepsi products. COOP Ale Works draft beer will also be available at a special rate of $3. First pitch is scheduled for 7:05 p.m.

Tickets can be purchased through okcdodgers.com/tickets. For general information or inquiries, please visit okcdodgers.com or call (405) 218-2182. Live radio coverage of each OKC Dodgers game begins 15 minutes before first pitch on AM 1340 “The Game,” 1340thegame.com and through the free iHeartRadio or MiLB First Pitch apps. All OKC Dodgers games are also available streamed live on MiLB.TV with a subscription.