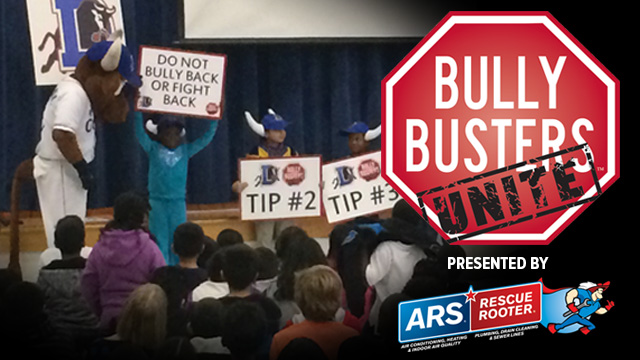 The Durham Bulls have announced the return of the successful anti-bullying program “Bully Busters,” which debuted in February of 2014. The initiative, in which the Bulls provide free school assemblies to raise awareness for a priority issue in elementary schools, will again travel to schools throughout Durham County, while expanding this year to Wake and Orange counties as well. ARS Rescue Rooter has partnered with the Bulls to present the program in its second year.

Using beloved mascot Wool E. Bull as the driving force, each interactive assembly engages students in recognizing bullying behavior and exploring what to do should they witness or experience bullying. At the conclusion of the 20-minute presentation, students are asked to take the “Bully Buster Pledge” at home with their families, and students who do so will be rewarded with two complimentary tickets to a select Durham Bulls game this spring. Additionally, the Bulls provide teachers and students with take-home activity books, further reinforcing the anti-bullying message.

In its inaugural campaign, the program reached over 10,000 students throughout Durham County. The success from 2014 has prompted growth into Wake and Orange counties in 2015, nearly tripling the number of schools the Bulls will visit in the initiative’s second year.

“We’re thrilled to bring back this extremely successful program for 2015,” Bulls General Manager Mike Birling said. “In our first year we reached a large number of students for a very pertinent, meaningful issue, and we’re excited to grow Bully Busters even further throughout the Triangle.”

Bully Busters, presented by ARS Rescue Rooter, will run from mid-January through the end of March. School administrators seeking more information about booking a Bully Busters assembly can do so by visiting the Bully Busters webpage.

This article originally appeared on the official website of the Durham Bulls. Click here to view the original story.