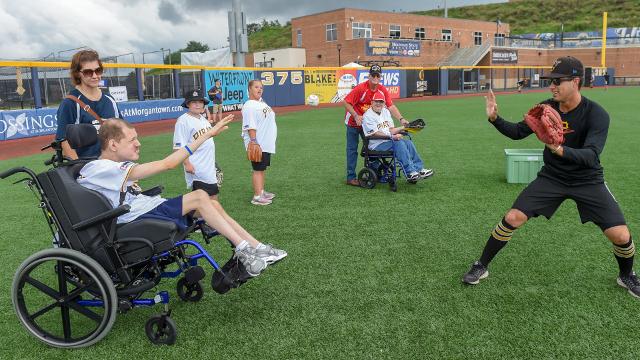 Black Bears players got to spend the morning with the Miracle League athletes, making new friends and teaching new skills in a variety of stations around the ballpark.

The day started off in centerfield, as each player received a Pittsburgh Pirates jersey customized with their name and number on the back to wear during the clinic. The Pepperoni Rolls and Cooper the Bear also made an appearance at the event, spending time with the athletes and getting them excited for their big day.

After the Miracle League players split off with their new Black Bears teammates, all athletes stood silent side-by-side for the National Anthem before breaking off into their respective stations.

In right field, the Pirates’ prospects threw batting practice, as the campers crushed home runs over the fence and into the bullpen. At the station down the first base line, the pitching staff gave the players some pointers how to throw an electric fastball to strikeout their opponents.

The Miracle League athletes also got to run the base paths with the Black Bears, zooming through the infield and crossing home plate to put runs on the scoreboard. They then traveled down the third base line to field some grounders, following that up by shagging fly balls in left field.

The final station was a game of catch, as the campers got to throw around with the Black Bears’ players while exchanging laughs, hugs and plenty of pictures.

Once the clinic was over, all the athletes got together for a group photo to commemorate a fun morning of bonding and baseball. They finished the day with a lunch on the suite level, as everyone chowed down with a beautiful view of the rolling West Virginia hills.

Stepping Stones West Virginia is a non-profit organization that gives children and adults with disabilities the opportunity to achieve their goals and stay active though many recreational activities. More information on this organization is available at www.steppingstones.askwhymedia.com.