Festivities begin at 2:00 on Field Street 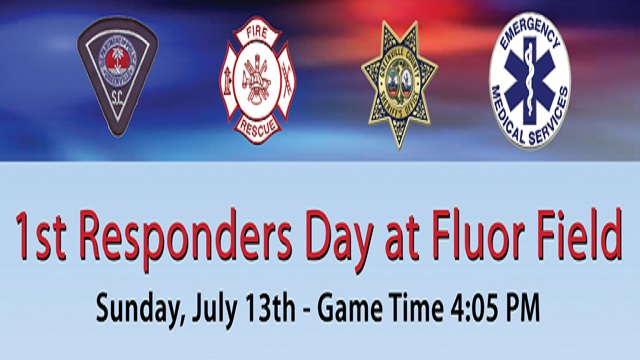 The Greenville Drive are proud to celebrate the First Responders of the City of Greenville on Sunday at Fluor Field.

The game with the Augusta GreenJackets begins at 4:05, but the activities will kick off outside the south gate on Field Street before the game. The entire street will be set up with hands-on equipment exhibits, including interactive displays and demonstrations of SWAT team tanks, EMS vehicles, patrol cars, K9 teams and much more.

All kids who participate with the hands-on equipment will have the opportunity to parade around the field as Future First Responders, along with squad cars, motorcycles, emergency vehicles and the members of each first responders department prior to the game.

First Responders will serve in pregame honorary roles, and throughout the game, the Drive will recognize and thank special members of each organization. They will also participate in between innings activities include a T-shirt toss by firemen/policemen repelling off the roof, tug-of-war, an eating contest and more.

Be sure to come out on Sunday to honor and thank these First Responders for the important role they serve in the community. To purchase tickets, stop by the Main Street Box Office, call (864) 240-4528 or log on to GreenvilleDrive.com.