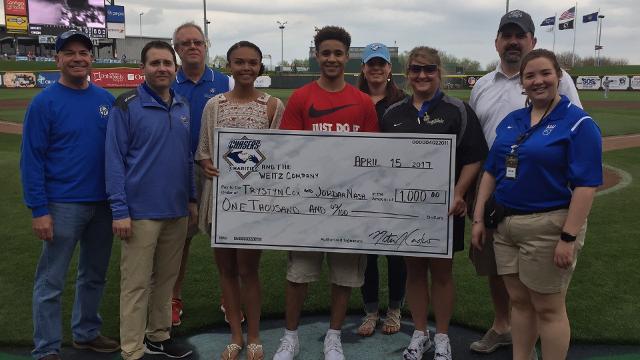 Chasers Charities, the charitable arm of the Omaha Storm Chasers, is proud to announce the eleventh annual Jackie Robinson Athletic Scholarship contest presented by The Weitz Company. The program honors two local African-American students in an effort to commemorate the baseball legend that broke Major League Baseball’s color barrier in 1947.

One male and one female student in the Omaha area will be awarded a $1,000 dollar scholarship from Chasers Charities. Each student will be chosen based upon their work in the classroom, involvement within the community, athletic achievement and other qualities.

“We remain committed in continuing the legacy of Jackie Robinson by offering these scholarships for the eleventh year, and we are thankful to The Weitz Company for partnering with us once again,” said Storm Chasers President and General Manager Martie Cordaro. “Every year we receive many deserving applications, and we expect this year to be no different.”

“”The Weitz Company is excited to partner with the Omaha Storm Chasers again this year to provide opportunities to the next generation.” said Weitz Company Business Development Manager Hilary Thien.

Interested applicants must submit their application by March 23. The winners will be honored at the Storm Chasers’ contest against the Memphis Redbirds on April 18. To be eligible for the Jackie Robinson Athletic Scholarship, students must meet the following criteria:

More information on the application process for the Jackie Robinson Scholarship can be found online by clicking here. Completed applications should be sent by March 23, 2018 to:

About Chasers Charities. Created in 2010, the mission of Chasers Charities is to support the community through charitable contributions that benefit sports and recreational activities with a focus on youth. The foundation accomplishes this mission through financial donations, as well as in-kind support, including memorabilia, tickets and publicity.