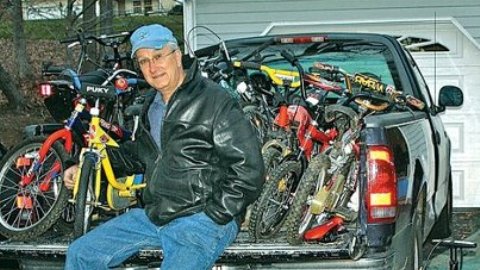 NORWICH- The Connecticut Tigers will be partnering with “Bikes For Kids” in hosting a bike drive prior to and during the game on Saturday, July 21st between Tigers and the Lowell Spinners, the New York-Penn League affiliate of the Boston Red Sox at 7:05 PM. The gates will open at 6:00 p.m. on Saturday, July 21.

Bikes For Kids was founded by the late Chuck Graeb in 1989. Graeb founded the organization on the idea that “every child should be able to experience the enjoyment of owning and riding their own bicycle.” Upon Graeb’s passing in 2009, current president David Fowler assumed leadership of the organization. “We put people on wheels that would either be walking or not really going anywhere at all,” said Fowler.

Representatives from Bikes For Kids will have a table set up on the concourse behind the press box during the game collecting new to slightly-used bikes, new helmets and other new or slightly-used equipment.

The organization reached 13,000 bicycles donated in November of 2011 and has already collected 700 bikes in the 2012 calendar year. With the assistance of the Tigers and the bike drive at Dodd Stadium, Bikes For Kids hopes to surpass a total of 14,000 bicycles donated by the end of the month.

The Connecticut Tigers are the Class-A affiliate of the Detroit Tigers and play in the New York-Penn League. The Tigers saw a 23% increase in attendance in 2011 (the 4th highest in Minor League Baseball), and are entering their 3rd season at Dodd Stadium. The Box Office is open 9 a.m.-5 p.m. Monday through Friday. In addition, tickets can be purchased over the phone at (860) 887-7962. For more information go online to cttigers.com.
This article originally appeared on the official website of the Connecticut Tigers. Click here to view the original story.