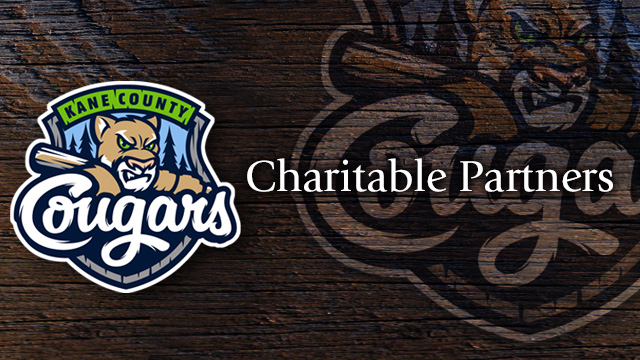 GENEVA, Ill. – The Kane County Cougars have announced a community partnership for the 2017 season in which four local organizations will receive a portion of the in-game 50/50 raffle proceeds through the Kane County Cougars Foundation, Inc. The four organizations will be Alive Naperville (April-May), Holiday Heroes (June), Fox Valley Wildlife Center (July) and Food for Greater Elgin (August-September). In addition, through a partnership with Acres Group, the Cougars have announced that DuPage PADS will be the recipient of the charitable proceeds from this year’s Pitch-In for Charity promotion in which fans can purchase and toss numbered tennis balls at a target on the field to win a prize following select games.

Alive Naperville (alivenaperville.com) – Alive is a teen-led, teen-driven center that works to empower local youth to become leaders through after school and summer programs, classes and events that build confident and resilient teens.

Holiday Heroes (holiday-heroes.org) – In partnership with hospitals and businesses throughout the Chicagoland area, Holiday Heroes works to provide parties and celebrations for children who are suffering from critical or chronic illnesses.

DuPage PADS (dupagepads.org) – Committed to the promise of ending homelessness in the local community, DuPage PADS is the largest provider of interim and permanent housing as well as support services to assist individuals who are working towards a life of self-sufficiency.

“The Cougars organization has consistently strived to give back to our surrounding community and these initiatives allow not only our organization, but our fans to give back in multiple ways,” said owner Dr. Bob Froehlich.

Added owner Chery Froehlich, “We have been very fortunate with the support that the community has shown us for the last 27 years and it’s important that we continue to show our thanks by contributing to these wonderful organizations.”

For more information about the 2017 season, which begins on April 6 against the Clinton LumberKings, visit kccougars.com.

The Cougars, Class-A Minor League affiliate of the Arizona Diamondbacks, have been at the forefront of family-friendly entertainment since 1991. In 2015, the franchise became the first Class-A team in Minor League Baseball history to welcome 11 million fans through the gates. A total of 152 former Cougars have reached the Major Leagues including Miguel Cabrera, Nelson Cruz, Josh Beckett, Adrian Gonzalez and Kyle Schwarber.