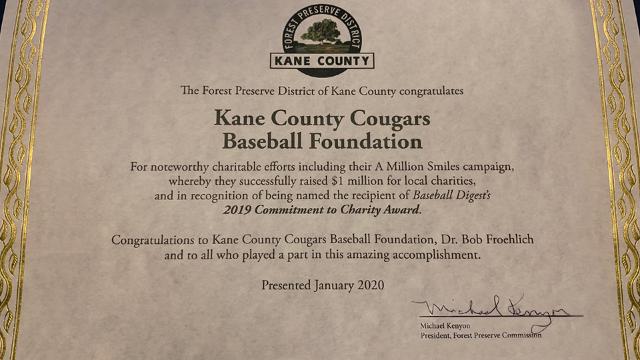 Cougars owner Dr. Bob Froehlich was presented with an official certificate of recognition and congratulations on receiving Ballpark Digest’s 2019 Commitment to Charity Award. This was the second consecutive year in which the Cougars Baseball Foundation donated over $1 million to charitable causes.

“This is an exciting time for the Cougars organization,” said Dr. Bob Froehlich. “Not only do the awards and accolades keep coming for the Foundation, but we’re also preparing to celebrate our 30th-anniversary season in 2020.”

Several capital improvements will be made at Northwestern Medicine Field to enhance the fan experience. In addition, a special logo reveal and 30th-anniversary team will be announced in the coming weeks.

The 30th anniversary season kicks off on Thursday, April 9 at 6:30 PM against the Cedar Rapids Kernels. Follow the Cougars on Facebook, Twitter and Instagram for updates on all the 30th-anniversary festivities including tickets and promotions.

The Cougars, Class-A Minor League affiliate of the Arizona Diamondbacks, have been at the forefront of family-friendly entertainment since 1991. In 2015, the franchise became the first Class-A team in Minor League Baseball history to welcome 11 million fans through the gates. A total of 180 former Cougars have reached the Major Leagues including Miguel Cabrera, Nelson Cruz, Josh Beckett, Adrian Gonzalez and Kyle Schwarber and Willson Contreras.