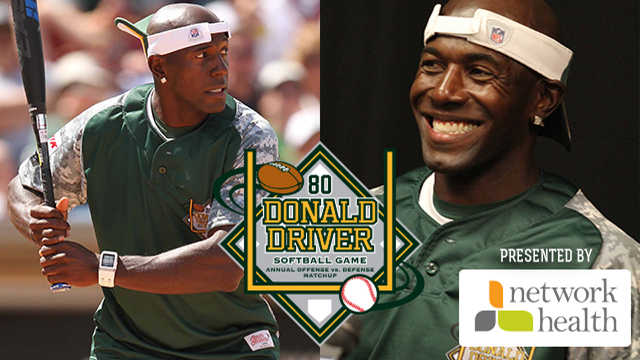 “I continue to appreciate and thank the amazing fans that support this game. Last year’s response was truly overwhelming, and I can’t wait to connect with everyone this year to raise money for an important cause,” said Driver.

“Donald Driver’s softball game is the highlight of the summer. It’s a fantastic atmosphere for everyone to witness the joy Donald gets from spending time with his family, friends and fans,” added Coreen Dicus-Johnson, President and CEO of Network Health. “As we pursue our mission to enhance the life, health and wellness of the people we serve, Network Health could not ask for a better event or a better partner in that journey than Donald Driver.”

Tickets for the softball game are $50 for a front row box seat, $40 for a standard box seat, $25 for a reserved bleacher seat and just $10 for a general admission grass seat. There are also a limited number of patio tables – which seat four – available at $200. The patio tables will include one autographed item signed by Donald Driver.

There are 69 All-You-Can-Eat seats available for this game for $80 per seat. This ticket includes admission to the game, an all-you-can-eat picnic for 90 minutes, and two beverages (beer, soda, or water).

Tickets to the Donald Driver Charity Softball Game are available in one of the following ways: Over the phone at 800-WI-TIMBER or (920) 733-4152; in person at the Neuroscience Group Field at Fox Cities Stadium Box Office; or through the internet at www.timberrattlers.com.