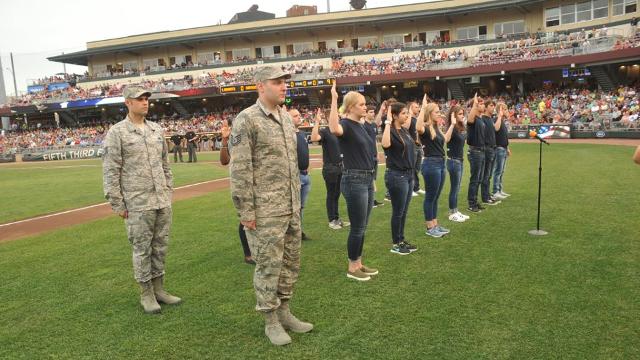 Dayton, Ohio-For the second straight year, the Dayton Dragons have been selected as the Midwest League nominee for a national award selected by Minor League Baseball that will be presented at the Baseball Winter Meetings in December.

The Charles K. Murphy Patriot Award is presented to one club from among approximately 180 Minor League teams for outstanding support of and engagement with the United States Armed Forces and veterans, both at the ballpark and in the community. The Dragons have been selected in a vote of the 16 Midwest League teams as the league nominee for the national honor in both 2016 and 2017, the first two years of the award’s existence.

The award is named after longtime Florida State League president Chuck Murphy, a former Lieutenant Colonel in the U.S. Army who served as the FSL’s top executive from 1990 until his passing in 2015.

For many years, the Dragons, in partnership with the Dayton Development Coalition, have included local military programs into their season-long schedule of events and promotions. Here are some highlights:

Hometown Heroes Celebration Nights are two special evenings focused on honoring our local service men and women from WPAFB and the Springfield Air National Guard. These games are filled with American-themed activities that celebrate the local military tradition. These nights give Dragons fans and the Dayton community the opportunity to support and thank our local service members and their families for the sacrifices they make.

Several other military events were also planned during the 2017 season at Fifth Third Field. On Memorial Day, Army PFC Mitchell Kirtley returned home from active duty in Afghanistan by surprising his family at a Dragons game. On June 14, in celebration of the 242nd birthday of the U.S. Army, the Association of the U.S. Army had an outing with the Dragons featuring numerous pre-game activities, and 30 Army recruits took part in a swearing-in ceremony during the game. On June 23, Vice Admiral Phil Wisecup threw out the ceremonial first pitch of the Dragons game. VADM Wisecup, from Piqua, is the former President of the Naval War College, the former Naval Inspector General of the United States Navy, and has been director of the Chief of Naval Operations Strategic Studies Group since 2013.

The Dragons are the Midwest League nominee for the Charles K. Murphy Patriot Award and will considered along with the nominees from each of the other leagues within Minor League Baseball. The national winner will be announced at the Baseball Winter Meetings in December.