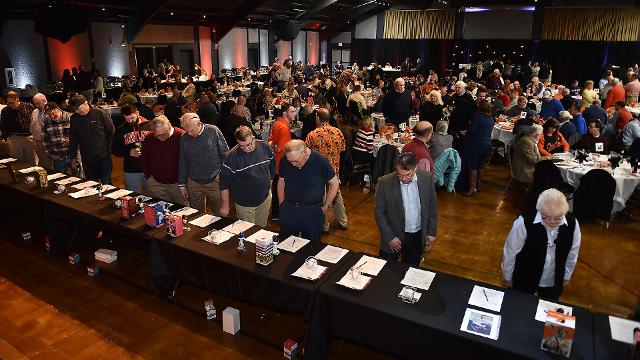 SALISBURY, MD – An appearance from the Orioles’ general manager and a donation to a new Wicomico County project became highlights of the 19th annual Shorebirds Hot Stove Banquet, held on Thursday, January 23, at the Wicomico Civic Center in preparation for the silver anniversary season of Delmarva Shorebirds baseball.

The keynote speaker for the event was Mike Elias, general manager and executive vice president of the Baltimore Orioles. Elias, who last visited Salisbury for the Shorebirds’ playoff game on September 6, took questions from the audience and spoke at length about the importance of Delmarva and Baltimore’s other minor league affiliates in reversing the Orioles’ major league fortunes in the coming years.

“Some of the names we’ve been reading about are going to start to arrive in Camden Yards,” said Elias. “It’s still about player development and those individual performances and not necessarily the team’s win-and-loss record. Those guys are taking steps forward, graduating to the big leagues and adjusting to big-league life.”

Elias also paid one last homage to the 2019 Shorebirds, who won a franchise-record 90 games en route to a South Atlantic League postseason berth and earned MiLB.com Minor League Team of the Year honors. Delmarva was one of four Orioles affilates who either made the playoffs (Bowie), contended until the season’s final day (Aberdeen), or finished with their league’s best record (Gulf Coast League Orioles).

“It’s exactly what you want to see, especially when you’re in a rebuild,” said Elias. “We’re focused on that type of success. The success of teams like the Shorebirds is really going to dictate what we do the next couple of years in Baltimore.”

Bitters announced during his presentation that the Shorebirds were donating $25,000 to Field 7 ½, a new initiative from the Wicomico County Department of Recreation, Parks, and Tourism designed to provide individuals with physical or mental disabilities the opportunity to play baseball. Bitters presented a ceremonial check on-stage to Department Director Steve Miller.

The night served as the downbeat for the 25th season of Delmarva Shorebirds baseball, set to begin on Thursday, April 9, against the Asheville Tourists at Arthur W. Perdue Stadium. Season tickets are now on sale and single-game tickets will be unveiled week-by-week for online purchase in the coming weeks.