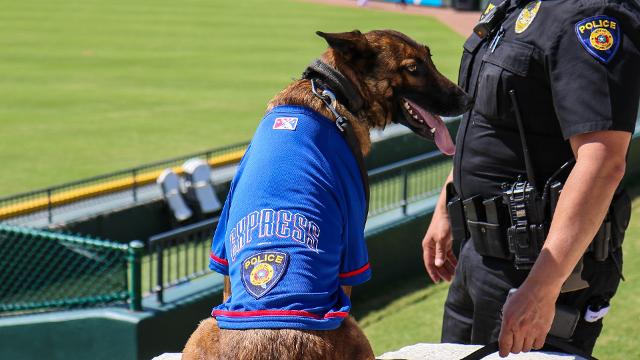 ROUND ROCK, Texas – The Round Rock Express are proud to announce that the team has donated a 22-month-old Belgian Malinois K-9 unit named Vada to the Round Rock Police Department. Express Owners Don and Bret Sanders purchased Vada from Slovak Working Dogs overseas, brought her to the United States, and facilitated the donation on behalf of the team.

The gesture comes less than a year after beloved RRPD K-9 Dega passed away following the discovery of an inoperable tumor. Dega was honored for her service at the Round Rock Express game on April 10, 2017, less than a month before her passing.

“We are incredibly proud to present Vada to the Round Rock Police Department on behalf of the Round Rock Express,” Bret Sanders said. “After my Dad and I heard of Dega’s passing, we wanted to help. This is just a small token of our appreciation for everything that RRPD does to keep not only Dell Diamond, but the entire City of Round Rock safe on a daily basis.”

Vada began her career in the K-9 patrol division but is quickly working up the ranks. This spring, she was certified by the National Narcotics Detector Dog Association to detect the odor of marijuana, cocaine, heroin, ecstasy and methamphetamines. In fact, on her way home from being certified by NNDAA, Vada assisted in the arrest of an individual carrying illegal narcotics.

The RRPD is currently training Vada in the disciplines of article searching and tracking. Vada will soon be able to follow and track human odor and the disruption of the vegetative state to the source.

“We are very thankful and appreciative of the Sanders Family and the Round Rock Express ownership group.” RRPD Officer Robert Ramos said. “Vada has been an amazing addition to the Round Rock PD family, as well as my family at home. She has surpassed my expectations and I could not be happier with her performance and where we are as a K-9 team.”

Single-game tickets, season memberships and flex plan ticket packages are on sale now. For more information on the Express, visit RoundRockExpress.com or call (512) 255-2255. Keep up with the Express on Facebook, Instagram, Snapchat and Twitter!