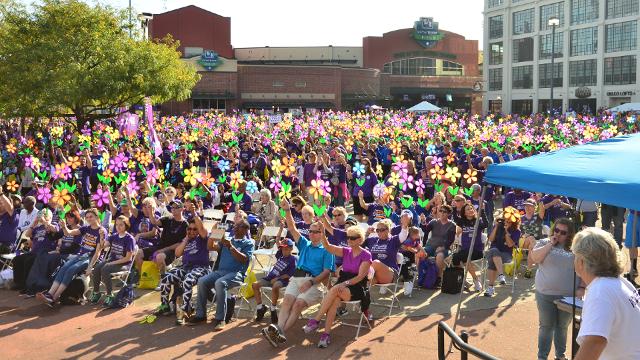 DAYTON, OH – Dayton, Ohio will host one of the nation’s largest Walks to End Alzheimer’s as the annual event brings attention to the impact and reach of the disease.

More than 3,000 people are expected to participate in the Saturday, Oct. 6 event sponsored by the Alzheimer’s Association Miami Valley Chapter. The event is a great way to support efforts for a cure, celebrate a loved one or honor caregivers.

“We’re looking forward to this year’s Walk to End Alzheimer’s,” said Eric VanVlymen, Executive Director of the Miami Valley Chapter. “Not only does the Walk support Alzheimer’s research, care, and support programs, but it’s also a chance for families and friends to come together and share a message of hope. We’d love to see the entire community get involved and join the fight to end Alzheimer’s.”

The Dayton Walk will take place at Fifth Third Field. Registration begins at 8:30 a.m. The walk starts at 10 a.m. While at the walk, participants can learn about Alzheimer’s disease, advocacy opportunities, clinical studies enrollment and support programs and services from the Alzheimer’s Association Miami Valley Chapter. Walk participants also honor those affected by Alzheimer’s disease with a poignant tribute known as the Promise Garden ceremony.

Walk Committee member Jenica Huelskamp said, “The Walk to End Alzheimer’s is truly a day of showing support and love for those facing Alzheimer’s. I’ve been participating in the walk for years with my family and I always leave feeling hopeful and refreshed that we can make a difference to end Alzheimer’s.”

All funds raised through the Walk to End Alzheimer’s further the care, support and research efforts of the Alzheimer’s Association. The Dayton Walk is the 25th largest walk in the nation based on dollars raised. Last year, $550,000 was raised during the Dayton walk.

Register today for the Walk. Sign up as a Team Captain, join a team or register to walk as an individual at alz.org/walk or call 800.272.3900.

The Alzheimer’s Association is the world’s leading voluntary health organization in Alzheimer’s care, support and research. Our mission is to eliminate Alzheimer’s disease through the advancement or research; to provide and enhance care and support for all affected; and to reduce the risk of dementia through the promotion of brain health. Our vision is a world without Alzheimer’s. Approximately 5.7 million in the U.S. are living with Alzheimer’s disease or another form of dementia. Almost 220,000 Ohioans are living with dementia. In the Miami Valley, about 30,000 people have dementia and approximately 100,000 people serve as their caregivers. The mission of the Alzheimer’s Association is carried out in Ohio by seven local chapters coordinating care and support, awareness, fundraising and advocacy initiatives. For more information on the Alzheimer’s Association call 1.800.272.3900, or visit alz.org.