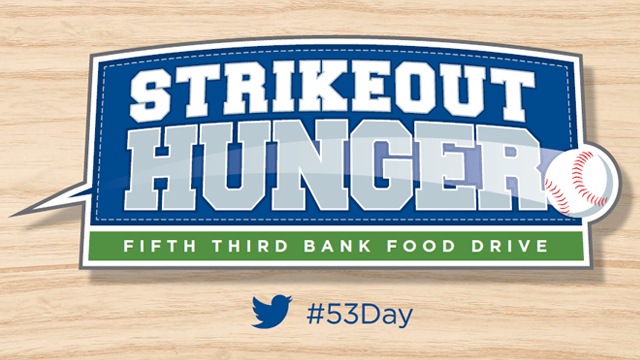 Kennesaw, Ga. – Today, Fifth Third Bank (Georgia) announced it is going to bat with the Gwinnett Braves – to launch Strike Out Hunger! This community food drive will run from April 18 through May 3 (“Fifth Third Day” on 5/3) and is aimed at collecting enough products to feed 5,300 families in the Atlanta Metro area.

Members of the community are encouraged to donate non-perishable food items – such as canned fruits and meats, peanut butter and boxed cereal – to participating Fifth Third Bank financial centers. While supplies last, the bank will give baseball game tickets to those who make a contribution to the food drive, courtesy of the Gwinnett Braves.

“We believe that a continual investment in our community can make a meaningful impact. Each year, the bank recognizes its employees, customers and the communities it serves on the third day of the fifth month – or 5/3 on the calendar,” said Randy Koporc, president of Fifth Third Bank (Georgia). “We’re proud to be working with top-notch organizations like the Gwinnett Braves, Kennesaw State University, the Augusta GreenJackets, the Atlanta Community Food Bank and the Golden Harvest Food Bank to help families and children in need throughout the Atlanta area.”

After the month-long food drive, the bank will deliver food donations to the Atlanta Community Food Bank, which will in turn feed thousands of families.

“The need for food in our community continues to increase, and the donated items will directly help people here in our own backyards,” said Bill Bolling, Founder and Executive Director of the Atlanta Community Food Bank. “Each year, we distribute more than 45 million pounds of food to help feed the food insecure through our network of more than 600 partner agencies throughout metro Atlanta and north Georgia. We are humbled that Fifth Third Bank has once again focused on contributing to our efforts to fight hunger and provide hope.”

“The Gwinnett Braves are proud to team up with Fifth Third Bank to help answer a vital need of our community,” said North Johnson, General Manager of the Gwinnett Braves. “The Atlanta Community Food Bank does a tremendous job in providing food to hungry children and families, and we are glad to do our part in helping keep those food banks stocked.”

To take part in fighting hunger and receive tickets to the Gwinnett Braves vs. Lehigh Valley Ironpigs on Saturday, May 3, 2014 at 7:05 p.m., residents can drop off food donations at financial centers in Alpharetta, Atlanta, Duluth, Lawrenceville, Loganville, Roswell, and Norcross from April 18 through May 3.

** Disclosure: NO PURCHASE NECESSARY. Offer available only at participating Fifth Third locations. Offer valid April 18, 2014 – May 3, 2014. Donations may be made during regular business hours. Limit one ticket per donated item with a maximum of four tickets per person. Offer good only while supplies last.

Food collection bins are set up at all 32 Fifth Third financial centers in the following counties: Columbia, Richmond, Fulton, DeKalb, Gwinnett, Walton, and Cobb. Location addresses are available at 53.com.

About Fifth Third Bank: Fifth Third Bancorp is a diversified financial services company headquartered in Cincinnati, Ohio. The Company has $130 billion in assets and operates 17 affiliates with 1,320 full-service Banking Centers, including 104 Bank Mart® locations, most open seven days a week, inside select grocery stores and 2,586 ATMs in Ohio, Kentucky, Indiana, Michigan, Illinois, Florida, Tennessee, West Virginia, Pennsylvania, Missouri, Georgia and North Carolina. Fifth Third operates four main businesses: Commercial Banking, Branch Banking, Consumer Lending, and Investment Advisors. Fifth Third also has a 25% interest in Vantiv Holding, LLC. Fifth Third is among the largest money managers in the Midwest and, as of December 31, 2013, had $302 billion in assets under care, of which it managed $27 billion for individuals, corporations and not-for-profit organizations. Investor information and press releases can be viewed at www.53.com. Fifth Third’s common stock is traded on the NASDAQ® Global Select Market under the symbol “FITB.” Fifth Third Bank was established in 1858. Member FDIC.

About the Atlanta Community Food Bank: The Atlanta Community Food Bank (ACFB) began operating in 1979 from a small space at St. Luke’s Episcopal Church. ACFB now distributes over 45 million pounds of food and grocery products each year from a 129,600 square-foot facility in N.W. Atlanta. The product is accessed by more than 600 partner nonprofits that provide food assistance to families and individuals in 29 counties across metro Atlanta and north Georgia. ACFB leads seven distinct projects that reinforce its mission to fight hunger by engaging, educating and empowering our community: Atlanta Prosperity Campaign, Atlanta’s Table, Community Gardens, Hunger 101, Hunger Walk/Run, Kids In Need and Product Rescue Center.

This article originally appeared on the official website of the Gwinnett Braves. Click here to view the original story.