Earlier this year, the Mets family lost a long-time member with the passing of beloved Hall of Fame catcher and Mets icon, Gary Carter, who left us on February 16th after a courageous battle with brain cancer. Throughout his Hall of Fame career, Gary Carter graced the game he loved with the fearlessness of a warrior and the joyful exuberance of a kid. His passion, leadership and guidance cemented his place in Mets lore as one of the most influential players in franchise history.

The Kid was a key cog during the Mets World Series Championship in 1986, and will forever be revered as a fan favorite by those who root for the orange and blue. Although Carter entered the Hall of Fame as a member of the Montreal Expos, he always had the orange and blue of his beloved New York Mets running through his veins.

With that in mind, the Cyclones will remember Gary Carter in a special pre-game ceremony on Friday, June 29th prior to the 7:00 pm game against the Aberdeen IronBirds. That evening the Cyclones will wear special orange and blue jerseys with a “Kid 8” memorial patch on the right sleeve – the same patch that the New York Mets are wearing throughout the season.

These special jerseys will be raffled off throughout the game with a portion of the proceeds to benefit the Gary Carter Foundation. This organization carries on Gary’s mission to better the physical, mental and spiritual well being of children in need. Even after his death the Kid continues to enrich the lives of those less fortunate.

Here’s a look at the special jerseys the team will wear and raffle off that evening: 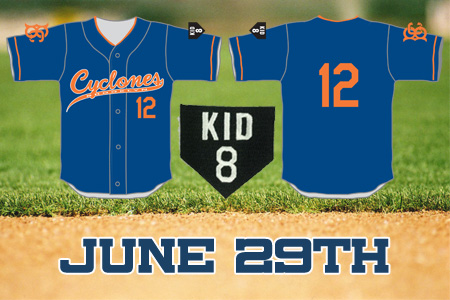 This article originally appeared on the official website of the Brooklyn Cyclones. Click here to view the original story.