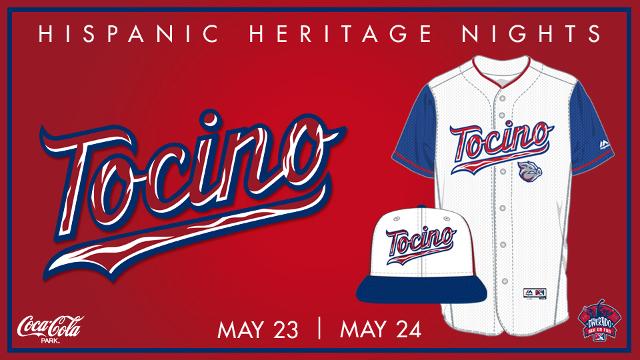 The Lehigh Valley IronPigs return to Coca-Cola Park for a four-game homestand May 21-24 against the Rochester Red Wings. Fans should look forward to the two-night Hispanic Heritage Celebration presented by La Mega Radio that includes both a jersey auction and cap raffle featuring our “Tocino” logo.

We are kicking off Wednesday’s theme night with a team photo and autograph session presented by People First Federal Credit Union. Guests will have the opportunity to take photos with and get autographs from players from 5:30-6:15 p.m. before the first pitch at 7:05 p.m.

In addition, the jersey auction and cap raffle presented by Tito’s Handmade Vodka will take place over the two-night event. The winners will be announced following the game on May 24. The jersey, which has a white base with blue sleeves and red accents, features the word “Tocino” in bacon-filled letters across the chest. The numbers on the back feature the same bacon pattern and a blue outline. The cap includes the same “Tocino” script and features alternating white and red panels with a blue bill. Proceeds from the jersey auction will benefit the Fe Foundation and their ‘Futuros Empresarios’ (Future Entrepreneurs) Program.

The celebration will be complete with Hispanic music, entertainment, and food choices.

The 2018 Season is the IronPigs’ 11th season at Coca-Cola Park and 11th as the top affiliate of the Philadelphia Phillies. Fans can get closer to the team than ever before with a Bacon, USA membership — a year-round IronPigs experience pass featuring numerous amenities such as savings on parking at games and at the Majestic Clubhouse Store at Coca-Cola Park, on-field VIP access to watch batting practice, access to the annual holiday party, and more. For more information, visit IronPigsBaseball.com or call (610) 841-PIGS (7447).

The 2018 IronPigs baseball season is presented by Capital BlueCross.