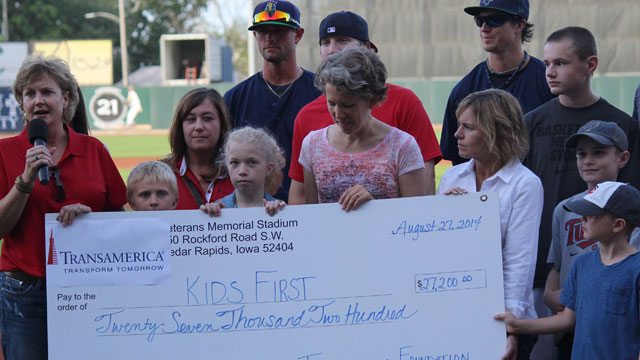 The Cedar Rapids Kernels partnered with three local companies during the 2014 season to raise over $35,000 for local charities through three different season-long promotions.

For the fifth consecutive season, The Transamerica Foundation has sponsored K’s for Kids, where for every strikeout (or K) recorded by Kernels pitchers this season (home and away, plus playoff games) Transamerica donated $25 to Kids First Law Center for Childr

en of Divorce. This season, Kernel pitchers struck out 1,188 batters for a grand total of $29,700 for Kids First. This is the fifth consecutive season that Transamerica has sponsored the K’s for Kids promotion and the highest pledge total to date.

“At Transamerica, we believe in supporting the communities in which we work and live. Since 1994, the Aegon Transamerica Foundation, through a combination of financial grants and the volunteer commitment of our employees, has supported a wide variety of non-profit organizations focused on the education, health and the well-being of community members” said Terrie Rethamel, VP of Specialized Operations with Transamerica. “Our $25 donation for every strikeout pitched by the Cedar Rapids Kernels supports the good work of the Kids First Law Center as they help children and their families through difficult circumstances. We appreciate all that they do to assist families, and consequently, our entire community.”

“It has been a privilege for CarePro Health Services to support the Horizons Meals on Wheels program over the past seven Kernels seasons” said Chris Nichols, Marketing Director at CarePro Health Services. “The Plating for Plates program has been a fun way to be able to support the community and has provided thousands of meals to area community members.”

For the fourth consecutive season, Millhiser Smith Agency, Inc. and West Bend Insurance have partnered to make a donation to Junior Achievement for every home run the Kernels hit at Perfect Game Field this season. In 2014, the Kernels hit 42 home runs and Millhiser Smith and West Bend Insurance donated $2,500 to Junior Achievement.

“One of our fundamental philosophies at Millhiser Smith is to reciprocate the support we receive from Cedar Rapids and surrounding communities – this is why we chose to support Junior Achievement” said Jessica Rhatigan, Risk Consultant with Millhiser Smith Agency, Inc.. “Their focus is on educating our children in preparation for a successful future and we’ve been honored to contribute to their efforts.”

These three companies combined to raise $35,415 for local non-profits in our community this season. The Kernels would like to thank The Transamerica Foundation, CarePro Health Services, Millhiser Smith Agency, Inc. and West Bend Insurance for their continued support of these local charity programs.

This article originally appeared on the official website of the Cedar Rapids Kernels. Click here to view the original story.