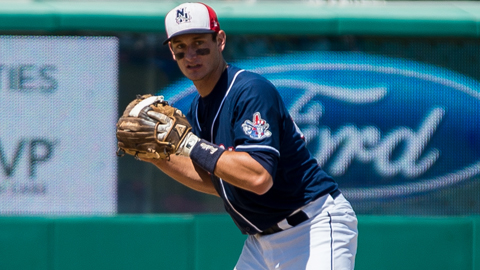 MANCHESTER, N.H. – The Toronto Blue Jays, parent club of the New Hampshire Fisher Cats, have announced that shortstop Kevin Nolan is this year’s winner of the Blue Jays Community Service Award. The 25 year-old New Hampshire shortstop has proven his commitment to the community through his tireless efforts and positive attitude.

“Kevin’s efforts in the community enhanced many lives beyond the diamond and this recognition is extremely well deserved,” said Fisher Cats President Rick Brenner. “The Blue Jays and their players know the importance of giving back to the communities where they spend their summer, and Kevin represented himself, the Fisher Cats, and the Blue Jays with class all season long. We appreciate all of his efforts.”

Nolan participated in nearly all of the team community appearances, always representing the organization with class and professionalism. A native of Nashua, Nolan contributed his time in many ways, including;

* Joining 100+ kids at a Dartmouth-Hitchcock Baseball/Softball Camp as a camp counselor at the first camp of the season
* Visiting, speaking to, and signing autographs for 100+ kids at the Boys & Girls Club of Greater Nashua on August 6, 2013
* Inviting the Boys & Girls Club of Greater Nashua to two (2) Fisher Cats games during the 2013 season; greeting the kids, signing autographs and helping to provide ice cream during the 7th Inning Stretch
* Taking time out of his pre-game routine to host special meet-and-greets with kids that expressed a personal interest in meeting him and growing up to be “just like him”
* Greeting patients from the Children’s Hospital at Dartmouth-Hitchcock and families alongside WMUR’s Jason King for a special batting practice for CHaD Kids
* Appearing at Dick’s Sporting Goods in Nashua New Hampshire for the spring registrations for Nashua Little League providing well-wishes to kids for their season

Nolan will be coming back to New Hampshire as a guest of honor at the annual Granite State Baseball Dinner, presented by Northeast Delta Dental, on Nov. 23. The event, beginning at 5 p.m. at the Radisson Hotel Expo Center in Manchester, raises money for the Children’s Hospital at Dartmouth-Hitchcock, the Ted Williams Museum, and the Fisher Cats Foundation.

This article originally appeared on the official website of the New Hampshire Fisher Cats. Click here to view the original story.