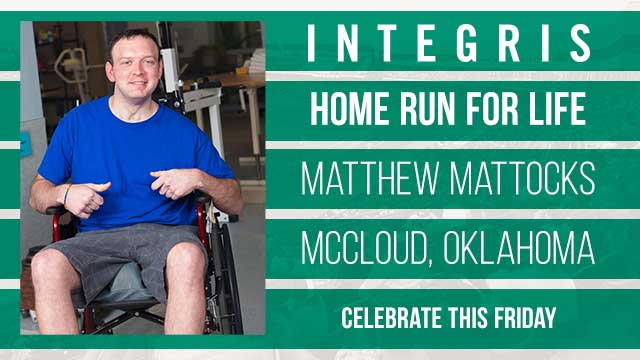 Mattocks experienced a cerebral infarction that blocked the supply of blood and oxygen to his brain in July 2016. He survived the massive brain stem stroke, which many people are unable to do, but suffered from locked-in syndrome. He was conscious, but unable to move for nearly a month.

After the care he received at INTEGRIS Jim Thorpe Rehabilitation, Mattocks continues to push toward his ultimate goal of walking once again.

“Home Run For Life” recognizes individuals in the Oklahoma City community who have overcome a significant medical event with the help of their families, physicians and health care professionals. To symbolize the end of their battle against adversity, honorees take a home run “lap” around the bases during an in-game ceremony.

“For the eighth straight year, we are proud to partner with INTEGRIS to recognize some amazing Oklahomans who have faced extraordinary adversity with their health,” OKC Dodgers President/General Manager Michael Byrnes said. “Their perseverance and courage are great examples and we are pleased to have the opportunity to honor their hard work in overcoming these challenges.”

Mattocks was a talented young musician who played several instruments by ear, loved theatre and performed in several productions and plays. But on July 6, 2016, the body that had provided him with so many talents and gifts, turned into a personal prison.

With locked-in syndrome, “there is complete paralysis of all voluntary muscles except for the ones that control the movements of the eyes,” according to the National Organization for Rare Disorders website. Cognitive function is typically unaffected and individuals with locked-in syndrome are conscious and awake, but are unable to produce movements or to speak, according to the website.

Once he was deemed strong enough, Mattocks moved to INTEGRIS Jim Thorpe Rehabilitation for 30 days.

Therapists at INTEGRIS Jim Thorpe Rehabilitation used Mattocks’ passion for music to build their sessions together.

He used a harmonica to help with his breathing and speech.

“It was neat to really incorporate his love for music into speech and make it something he enjoyed doing,” Speech Therapist Halley Bailey said.

“I saw his guitar and I handed it to him and I said I need you to play this for me,” she said. “I mean, I’m sure it was frustrating for him because it wasn’t the big beautiful pieces that he used to play, but he just lit up.”

Mattocks’ brother David Dobson said his brother was on a clear plan from his first day at INTEGRIS Jim Thorpe Rehabilitation with a vision for what he was going to go accomplish throughout the month.

“That’s a lot for somebody who was never supposed to move.”

Mattocks kept fighting and smiling despite his initial bleak prognosis.

“He didn’t just make this miraculous recovery that happened overnight where he got up and walked out of here – that didn’t happen,” Voight said. “But despite all the challenges, he had a smile on his face.”

Now Mattocks continues to push toward his ultimate goal thanks to the care he received at INTEGRIS Jim Thorpe Rehabilitation.

“I will walk again,” Mattocks said. “Never give up. Never.”

The OKC Dodgers continue their series today against Memphis at 11:05 a.m. at Chickasaw Bricktown Ballpark on a Field Trip Day. Tomorrow the Dodgers and Memphis play at 7:05 p.m. on a $2 Thursday, featuring $2 Pepsi products, bottled water and select beer.

Tickets are available through the OKC Dodgers ticket office located on South Mickey Mantle Drive, by phone at (405) 218-2182, or by visiting okcdodgers.com.