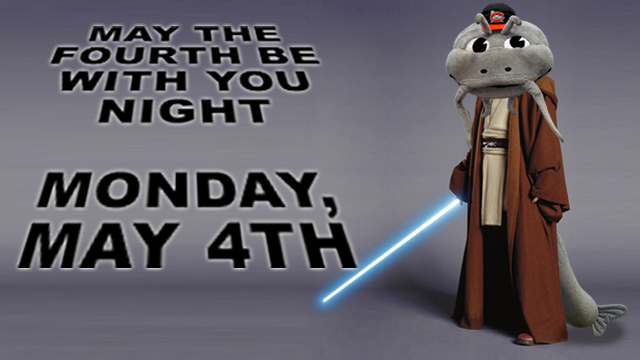 ZEBULON, NC – The Carolina Mudcats, the Class A Advanced affiliate of the Atlanta Braves and member of the historic Carolina League, will host the Make-A-Wish Foundation of Eastern North Carolina as they grant a special wish on May the Fourth Be With You Night at Five County Stadium on Monday, May 4.

May the Fourth Be With You is a Star Wars themed night that will take place on Monday, May 4 when the Mudcats play the Frederick Keys in Zebulon at 7:00 p.m.

The Eastern North Carolina Make-A-Wish Foundation will grant a special wish to a young child with a special ceremony scheduled to take place on the field on May 4 in conjunction with the special theme night. Additionally, the Mudcats will also make a donation to the Eastern North Carolina Make-A-Wish Foundation with a check presentation before the game.

The Mudcats have also invited young fans, and their families, from the Eastern North Carolina Make-A-Wish Foundation to participate in the May the Fourth Be With You festivities. Fans wearing a Star Wars themed costume to the game will have an opportunity to purchase $6.00 discounted tickets.

May the Fourth Be With You is one of several special theme nights set to take place at Five County Stadium during the home stand. The home stand, which begins on Friday, May 1, also features NC State Day and Pro Wrestling Day on Sunday, May 3.

Former NFL and NC State Wolfpack star players Terrence and Torry Holt will be at Five County Stadium for NC State on May 3. The brothers will throw out the ceremonial first pitch and hold signups for their upcoming Holt Brothers Football Camp scheduled for June 27 in Raleigh.

Additionally, an appearance by Sgt. Slaughter is scheduled for Sunday, May 3 as part of Pro Wrestling Day.

The Carolina Mudcats are the Class A Advanced affiliate of the Atlanta Braves. The 2015 “Braves New World” season is the first for the Mudcats as an affiliate of the Atlanta Braves and their fourth straight in the historic Carolina League. First established in 1991, the Carolina Mudcats are entering their 25th straight season of baseball at Five County Stadium in Zebulon, N.C. Fans can purchase tickets or find more information by calling (919) 269-2287 or by visiting www.carolinamudcats.com.

This article originally appeared on the official website of the Carolina Mudcats. Click here to view the original story.