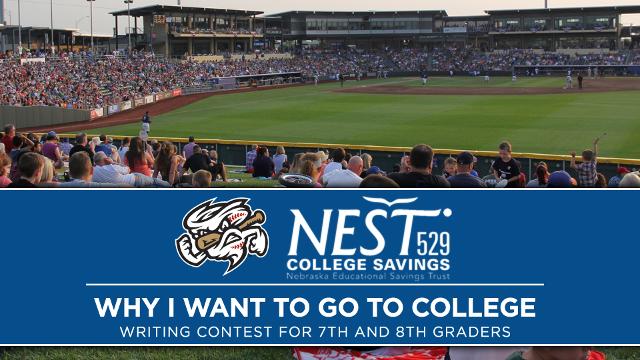 The Nebraska Educational Savings Trust (NEST) and the Omaha Storm Chasers have officially begun the 16th annual “Why I Want to Go to College” essay contest, as announced by Nebraska State Treasurer Don Stenberg.

Seventh and eighth grade students from around the country may submit their entries leading up to the March 2 deadline Essays must be 750 words or less, describing the student’s educational goals and dreams for the future. Entries are required to be typed and double-spaced on 8 1/2 by 11″ paper and must be the student’s original work. Each essay must also be accompanied with the required cover sheet, which can be found here: http://bit.ly/2018ContestCoverSheet.

Winners will receive prizes ranging from $500 to $2,000 toward a NEST College Savings Plan. First, second and third place winners will be honored from each of Nebraska’s three Congressional districts, in addition to out-of-state entries. Entries will be judged by students and faculty at Midland University in Fremont.

All winners hailing from the state of Nebraska will be notified in April. Winners will also receive four box seat tickets to the Storm Chasers’ game on May 6, in addition to being recognized prior to that day’s contest for their achievements.

Complete rules and information on the essay contest may be viewed here: http://bit.ly/2018ContestRules.

Entries must be postmarked by March 2 and sent to:

Following the Royals Exhibition Game presented by SAC Federal Credit Union on March 26, the Storm Chasers begin 2018 regular season Pacific Coast League play at Werner Park on Thursday, April 5. The Omaha Storm Chasers have been the Triple-A affiliate of the Kansas City Royals since the franchise’s first game on April 18, 1969, and is the longest-running Triple-A affiliation in Minor League Baseball.