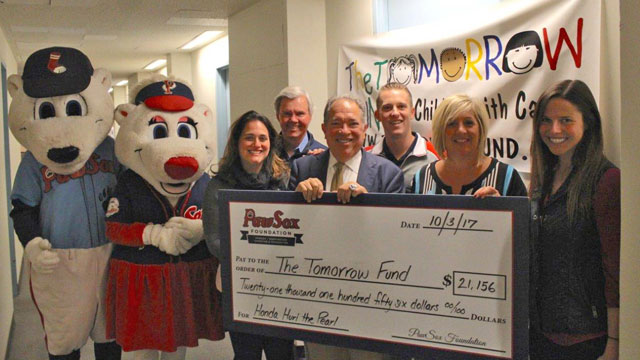 The PawSox Foundation today presented $21,156 to the Tomorrow Fund at Hasbro Children’s Hospital in Providence, RI, to help families of children who are battling cancer. The funds are generated at the PawSox’ nightly “Hurl the Pearl” contest presented by six local Honda dealers.

“Childhood Cancer is one of the primary areas of focus of the PawSox Foundation,” said PawSox President Dr. Charles Steinberg. “We are inspired by the great work and good deeds of the Tomorrow Fund, and we are pleased to help their efforts. Talking to the families who have benefited from their care, we recognize what a treasure Rhode Island has in the Tomorrow Fund.”

At each game, fans purchase soft white baseballs and throw them at a Honda circling the field. Their donations go to the Tomorrow Fund. (Fans who toss balls through the open sun roof receive a PawSox Prize Pack of souvenirs.)

For the second straight year, the PawSox helped launch Childhood Cancer Awareness Month (September) in their final weekend of the season.