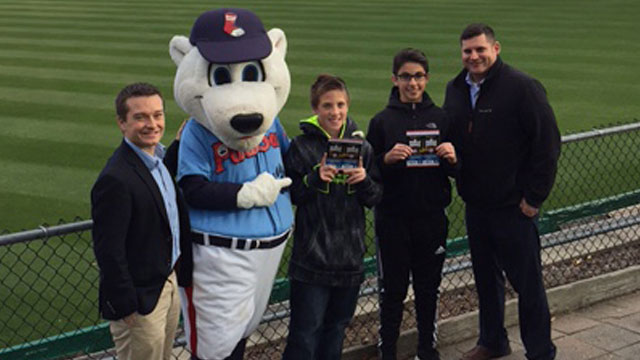 Brian Vanasse, Jr. and Jack Marsella hold their tickets for the 2016 World Series in Chicago as the PawSox, for the 27th year, are sending two youngsters from the Pawtucket Boys and Girls Club, along with their dads, to the Fall Classic. Dan Rea, PawSox Senior VP and General Manager (far left) and Luke McLaughlin (far right) of the Pawtucket Boys and Girls Club visited with the families at McCoy Stadium before sending them off to Chicago.

Two Rhode Island children, together with their dads, will attend the World Series this weekend, thanks to the PawSox and the PawSox/Skeffington Charitable Foundation. The children were selected from the Pawtucket Boys and Girls Club. The all-expense paid trip continues an annual tradition started 27 years ago.

The children, Jack Marsella, 13, of Providence and Brian Vanasse, Jr., 10, of Pawtucket, will be accompanied by Jack’s father, Paul, and Brian’s father, Brian.