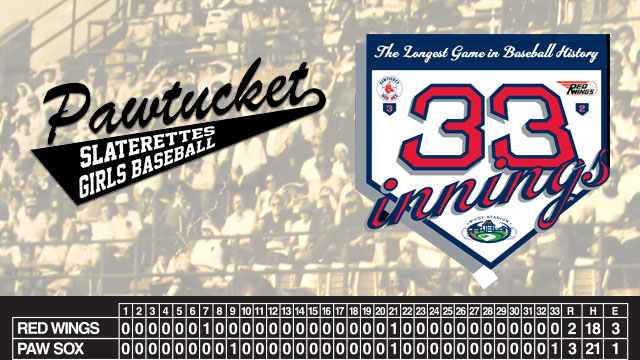 The Pawtucket Red Sox are inviting the Pawtucket Slaterettes, one of the nation’s only women’s baseball leagues, to play 33 innings of baseball at McCoy Stadium on Saturday, August 19. Admission is only $5, and proceeds benefit the Slaterettes and the PawSox Foundation.

The special event pays tribute to the historic 33-inning game played in 1981 by the PawSox and the visiting Rochester Red Wings. The fundraiser is part of the club’s season-long celebration of the 75th anniversary of McCoy Stadium.

The marathon begins at noon and continues until all 33 innings are played.

“We are delighted to have been invited by the PawSox,” said Deb Bettencourt, Pawtucket Slaterettes Player Agent. “For our women of all ages to play hardball on this diamond where so many great players have played, and where the 33-inning game took place, is a dream-come-true.

“So many of our ballplayers were inspired by the movie, ‘A League of Their Own,’ and how it brought to light the story of the All-American Girls Professional Baseball League. The opportunity to pay tribute to these women, and to the PawSox, and to our beloved city of Pawtucket, is a thrill our players and their families will remember forever.”

The game will be played by members of various age divisions within the Slaterettes organization. The innings will be spread as follows:

“It is a pleasure to produce an event that unites the people of Pawtucket,” said PawSox President Dr. Charles A. Steinberg. “We hope that women (and men) see that, here in Pawtucket, women have been playing baseball in ‘A League of Their Own’ for years. May this event inspire more young girls to realize that the doors to the wonderful world of baseball are wide open.

“Over the past two seasons, we have been blessed to welcome such players from the AAGPBL as Rhode Island’s own Wilma Briggs and California’s Maybelle “All the Way May” Blair and Shirley Burkovich. Part of this tribute is a tip of the cap to them.

“We also tip our caps to the actors, actresses, and crew who made the film, which this year celebrates its 25th anniversary. Megan Cavanagh, who memorably portrayed Marla Hooch, recently visited our park and inspired more young women with her stories-including the fact that she did all of her own hitting in the movie.

“Several women playing key positions in our front office have been lifelong ballplayers, and we are eager to show all who are watching that the opportunities to play baseball belong to everyone.”

All tickets are general admission, and concessions and merchandise will be on sale.

The Slaterettes comprise baseball players from age 5 to 55. The league, now in its 45th year, was created in 1973.

The PawSox Foundation, now in its 19th year, produces such programs as the PawSox Scholars, A Veterans Home Run, and fundraisers for the Tomorrow Fund. It also supports many charities in Pawtucket, in Rhode Island, and in the PawSox community.