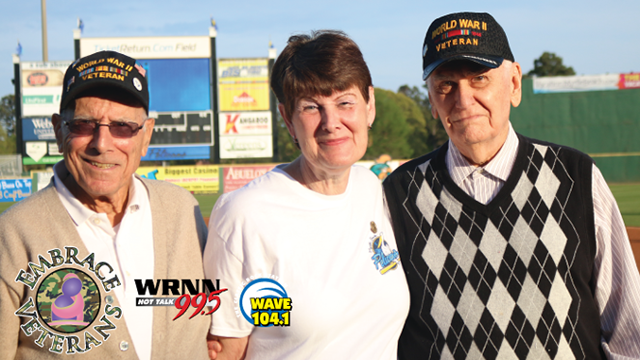 MYRTLE BEACH, S.C. (APRIL 30, 2015) – In commemoration of the 50th anniversary of the Vietnam War, the Myrtle Beach Pelicans, Class A-Advanced affiliate of the Chicago Cubs, are pleased to announce Military Appreciation Day. The event, presented by Embrace Hospice, Hot Talk 99.5 FM, and Wave 104.1 FM, will take place on May 14 when the Pelicans host the Carolina Mudcats for a 7:05 p.m. ET first pitch at TicketReturn.Com Field at Pelicans Ballpark. Gates to the ballpark will open at 5:30 p.m. ET to accommodate fans for the numerous pregame festivities.

Pelicans players will wear custom-made camouflage jerseys for the game. The jerseys, reflecting the familiar design of military uniforms from the Vietnam War era, will be auctioned during the game. Proceeds from the auction will benefit Vietnam Veterans of America, Inc., Chapter 925.

The first 1,000 fans through the gates will also receive a card set featuring the photos and stories of 36 Grand Strand veterans and active military personnel. The uniformed men and women from those cards will be represented that night, either by being in attendance themselves, or by members of their family.

The night will also have pre-game festivities aplenty. The Vietnam Veterans of America, Inc., Chapter 925 will hand out 5,000 miniature American flags to fans at the gates and will also honor the Pelicans franchise as a Purple Heart supporter team. There will be a pre-game colors dedication, as well as a ceremony held around the Missing Man Table. The veterans being honored on the card set will be introduced individually before the first pitch, and to wrap up the pre-game ceremonies, a paratrooper will parachute into TicketReturn.Com Field at Pelicans Ballpark while holding an American flag.

Embrace Hospice joined the Pelicans as a partner in 2014 with “Embrace a Veteran,” one of the most popular programs from that season, in which veterans were asked to stand up at every home game and be recognized. Saturdays became Embrace Veterans Saturdays, where select Grand Strand veterans were highlighted and honored, and their stories were told in person and on the video board. A veteran and Embrace Hospice employee threw out a first pitch at these games as well.

“The game of baseball has incredible roots connected with the U.S. military, and we are thrilled whenever we can grow and diversify the way that we honor our veterans-especially our local ones,” Guild said. “Embrace Hospice agrees, and they were excited to partner with us on this as well.”

For Embrace Hospice, the cause is an important one, but also a personal one.

“Many of us are veterans ourselves, so this has an extra special meaning to us and the many veterans we employ,” said Kevin McHugh, CEO of Embrace Hospice. “Our veterans are one of this country’s greatest accomplishments. What they have done for our freedom makes going to a ballgame an everyday thing for Americans. We hope the community joins us once again this year at Pelicans ballgames to say thank you and to ‘Embrace a Veteran’.”

In addition to the card set and year-long program, the Pelicans have dedicated an empty seat at the ballpark, located near the Clark and Addison Grille and Hops Heaven. The seats remains unoccupied in honor of lost prisoners of war (POW) and service members who are pronounced missing in action (MIA).

Information on Embrace Hospice will be available on the main concourse at TicketReturn.Com Field at Pelicans Ballpark for each Embrace Saturday all year long. The dates for the remaining Embrace Veterans Saturdays in 2015 are as follows: May 23; June 6, 13, 20; July 11, 25; August 8, 15, 29.

The 2015 season marks the 17th season for the Pelicans franchise and first as the Class A-Advanced affiliate of the Chicago Cubs. For information on tickets to see the Pelicans in 2015, please call (843) 918-6000, e-mail info@myrtlebeachpelicans.com, or visit www.MyrtleBeachPelicans.com.