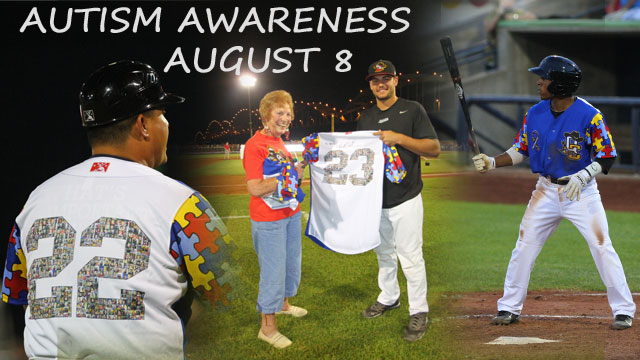 The Quad Cities River Bandits are again offering fans the chance to put their photographs in small squares in the team’s jersey numbers for the annual photo jersey auction on Autism Awareness Night presented by KWQC on Aug. 8 at Modern Woodmen Park. All of the proceeds of the square purchases and jersey auction will benefit the Quad Cities Autism Center Inc.

At $25 per square, fans can purchase a space in the River Bandits’ jersey numbers to feature a photograph of themselves, a family member or friend, or a picture chosen by the Quad Cities Autism Center. A limited number of squares are available, and each square comes with a certificate of purchase. Each square is guaranteed to be on at least one jersey, and the maximum individual order is five squares.

In 2012, the River Bandits became the first U.S. professional sports team to hold a photo jersey auction for charity, and the team’s second annual event was recognized last season with the annual Golden Bobblehead Award for the Best Charity Promotion or Event in Minor League Baseball.

“We are thrilled to partner again with the Quad Cities Autism Center to give River Bandits fans another incredible opportunity to be part of a nationally-recognized promotion and help fight autism right here in the Quad Cities,” said River Bandits owner Dave Heller. “The Quad Cities community has shown generous and enthusiastic support for the photo jersey auction and has demonstrated its determination to help fight autism, and we are excited for another memorable event at Modern Woodmen Park!”

In 2013, the River Bandits’ Autism Awareness Night raised more than $12,000. The promotion was selected in September 2013 among nearly 200 nominations as a finalist in its promotional category. It was later selected as the 2013 Golden Bobblehead Award winner for Best Charity Promotion or Event at Minor League Baseball Promotional Seminar in Louisville, Ky., last September.