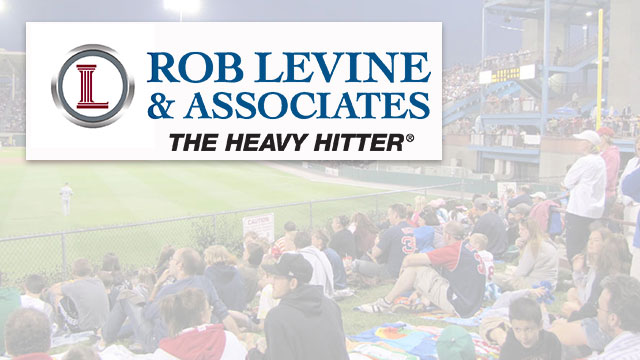 Providence Injury and Disability Attorney Rob Levine continues his partnership with the Pawtucket Red Sox at McCoy Stadium for the 2018 season. The partnership, initiated by Rob Levine himself in the Fall of 2016 after attending a Red Sox game at Fenway Park, is coined the Rob Levine Kids Corner. The program invites children and community organizations focused on youth to attend a game at McCoy Stadium with Levine’s compliments. Rob Levine’s Kids Corner provides 20 tickets to every (approximately 70) home game during the PawSox season.

Kids Corner attendees receive VIP treatment while at McCoy. “We’re giving organizations and kids within our community the opportunity to attend a game, experience this all-American pastime, and create unique memories at McCoy Stadium,” says Levine. “Dozens of community programs have benefited from the Rob Levine Kids Corner, including the Boys and Girls Club, the local YMCA’s, school groups, and nonprofit organizations focused on youth and children. We encourage all community youth groups and programs to get involved so we can give this opportunity to as many children as possible, “Levine further states.

Levine is passionate and devoted to public services not only through his career as an attorney but also as a retired police officer, paramedic, and military police officer. This sponsorship among others, allow Levine and his Team to advocate for the community in which they live, work, and play. Rob Levine’s Kids Corner highlights their mission of helping those in need from a legal capacity as well as giving back to the community in many ways as often as he can.

“Thanks to Rob Levine, we are thrilled to be able to offer the Rob Levine’s Kids Corner and expand our guest list to provide many more individuals and organizations with a first-class experience at McCoy Stadium,” states Rob Crain, Sr VP of Sales and Marketing for the PawSox. “Rob Levine’s generosity and commitment to community, is amazing and we are proud to have him and his Team as our community partner,” Crain further states.

About Rob Levine and Associates

We know him as the Heavy Hitter and in his current occupation as an Attorney, helping individuals who have been hurt in an accident or who are disabled. However, you may not be aware of Rob Levine’s background. From an early age, Rob knew he had a calling. At sixteen, when most kids his age were simply out being kids, he became part of the Glen Rock Volunteer Ambulance Corps, holding a position of EMT (emergency medical technician). He was promoted within a year to Crew Chief. During his nine years of commitment and dedication, he rose through the ranks to become second-in-command of a fifty-person rescue squad. This was the beginning of his call to serve.

The next phase of Rob’s career took him to college for Administration of Justice and to the Rhode Island Army National Guard. There he served three years as a military police officer. After his national service and graduating from college, he took a step toward serving the community. He was hired as a police officer by the Central Falls Police Department. Seeing the many needs of the citizens of Central Falls during his first six months on the force, Rob decided it was time to do more. He began a writing project for a grant and secured sixteen thousand dollars for the department’s first K-9 Drug Enforcement unit. Upon his appointment as the K-9 Officer, he went to California for formal training. In addition to his patrol duty, Rob and his dog were instrumental in fighting the ever-present drug problem in the city.

His police work was not the only thing he was focused on, Rob also concentrated on his personal development. Rob began to attend law school, was learning how to fly helicopters, practicing in a Robison R-22, helicopter. After graduating from law school Rob retired from the police department and began to practice law continuing to help those in need. Rob also continued to feel the need to serve the community as a volunteer and became a Ski Patroller. Not being fully satisfied with his medical background as an emergency medical technician, Rob went back to school to become a paramedic. Rob now works and volunteers his time as a paramedic, riding on an ambulance, trying to make a difference.

His background and focus has always been on helping those in need and giving back to the community in many different capacities as often as he can. Rob Levine and Associates are personal injury attorneys helping individuals who have been hurt in an accident or who are disabled. The firm practices law and services Rhode Island, Massachusetts, and Connecticut on injury cases. Rob Levine and Associates also handles social security disability and veterans disability cases on a regional and national level as well. Our team is available 24/7 to help you. Contact us for a FREE consultation at 800-742-3940 or visit our website for more information. Our Fee Free Policy ensures that you do not pay unless you win.