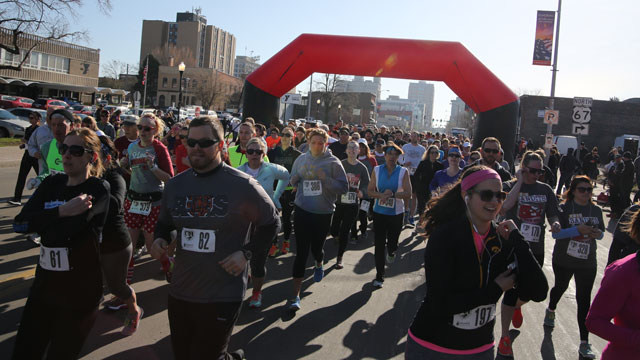 Nearly 700 runners and walkers set a new record for participation in the annual Bandits Race to Home 5K and Fun Run presented by Palmer Chiropractic Clinics on Saturday morning. In its third year, the unique bi-state race that ends inside Modern Woodmen Park helped raise more than $15,000 – also a new event record – for the Bandit Scholars Program.

“We are tremendously grateful to all of the participants, sponsors, volunteers, staff and spectators who made the Bandits Race to Home 5K presented by Palmer Chiropractic Clinics the most successful yet,” said River Bandits owner Dave Heller. “As one of the largest fundraisers for the Bandit Scholars Program, this event makes an impact in the lives of Quad Cities-area students, and it is a unique community celebration that is the perfect way to kick off another River Bandits season at Modern Woodmen Park!”

Danielle Berndt of Bettendorf, Iowa, became the event’s first repeat overall winner Saturday, leading all female participants by finishing in 19:09 – setting the female record for the Bandits Race to Home 5K. She led all females with a 20:21 finish in 2014.

Here is a link to full race results; and below is a list of the winners in their respective age group.

The Bandits Race to Home 5K began on 2nd Street in Davenport, Iowa, in front of the YMCA. The five-kilometer route crossed the Centennial Bridge into Rock Island, Ill., and the Rock Island Arsenal Bridge back into Davenport before ending at home plate inside Modern Woodmen Park. The quarter-mile Fun Run for kids began outside the party plaza and ended inside the playing field.

UP NEXT: Gates open for the home opener at 12:15 p.m. Sunday, when the first 1,000 fans receive a Mediacom River Bandits pennant, and the first 2,000 fans receive a Mediacom River Bandits magnet schedule. River Bandits players will sign autographs on the field at 12:30 p.m. The Nintendo Wii-ster Egg Hunt is at 12:45 p.m., with three Wii-U systems to be given away. Family Sunday presented by B-100 and ESPN 93.5 means Bark in the Park on the Modern Woodmen Berm and postgame Kids Run the Bases presented by Prairie Farms. Individual tickets are on sale at the River Bandits box office and online at riverbandits.com. Ticket plans of 12 to 70 games – which include free parking, reserved seats, merchandise discounts, and guaranteed giveaways – are available by calling 563-324-3000.

ABOUT THE BANDITS: The River Bandits ownership in 2014 made one of the biggest improvements to Modern Woodmen Park since the ballpark was first built back in 1931! A new Ferris wheel, standing 105 feet over the playing field, opened May 24, Space Camp opened June 20; the new Drop’N Twist debuted in July; and the newly expanded 300-foot long zip line also reopened.