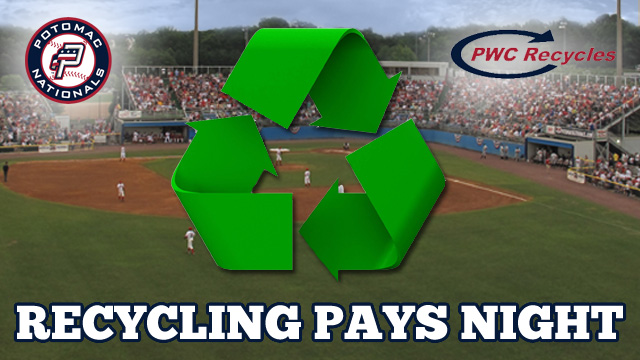 The Potomac Nationals are excited to announce a pair of “Recycling Pays” nights at Pfitzner Stadium sponsored by the Prince William County Recycling Program. The first recycling appreciation night is scheduled for Friday, July 18th as the Nationals take on the Wilmington Blue Rocks (Kansas City Royals), and the second evening in which recycling will be in the spotlight is Friday, August 15th in a P-Nats contest against the Carolina Mudcats (Cleveland Indians).

P-Nats fans will get the opportunity to save money and the environment with these events thanks to Prince William County Solid Waste Division’s Recycling Program. All fans who show up to the Potomac Nationals Ticket Office on each game day with recyclables in hand will receive half-off general admission tickets. In addition, everyone who tweets or posts to Facebook a picture of themselves recycling inside the ballpark during the July 18th game will receive a ticket to the second recycling night on August 15th.

On August 15th, the P-Nats’ faithful may also bring recyclables to receive 50% off GA tickets for that evening’s game and can tweet or post to Facebook the act of recycling at The Pfitz to receive an undated ticket voucher for the 2015 season.

This article originally appeared on the official website of the Potomac Nationals. Click here to view the original story.