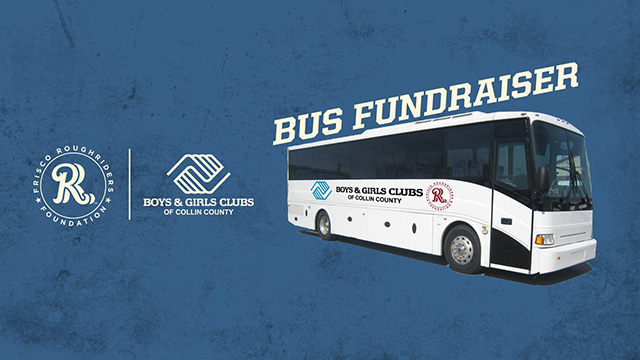 FRISCO, Texas (May 11, 2018) – The Frisco RoughRiders Foundation has announced a season-long, multi-faceted initiative to raise funds for the Boys & Girls Clubs of Collin County Bus Fund. The foundation’s goal is to help purchase a 72-passenger bus to aid the organization’s mission.

“With the addition of at least one new full-size bus in each club in Frisco, McKinney and Plano, we will be able to add over 300 new members, impacting these young lives with great programs in a safe, nurturing environment, where we concentrate on academic success, character and leadership as well as health and life skills,” said Mike Simpson, CEO of the Boys & Girls Clubs of Collin County. “New buses are the vehicles to great futures for more kids.”

A portion of the proceeds from following events will be earmarked for the Bus Fund:

“It’s important for the Frisco RoughRiders to make memories for our community in and out of the stadium,” said Breon Dennis, Executive Director of the RoughRiders Foundation. “The 72-passenger bus will let children at the club know that the future is now and we support them. I hope the entire North Texas community will join in this campaign to make a difference together.”

About the Boys & Girls Clubs of Collin County

The Boys & Girls Clubs of Collin County has been meeting the needs of children in Collin County and North Texas for 50 years since 1968. BGCCC’s mission is to “Enable all young people, especially those who need us most, to realize their full potential as productive, caring, responsible citizens“. The organization currently serves over 9,300 children each year through its after-school, summer and outreach programs.

BGCCC serves 71 schools in Collin County and has 21 buses and vehicles which must transport the children to the Clubs. The organization has branches in McKinney, Plano and Frisco and currently operates an on-site school program at Shepton High School in Plano.

About the RoughRiders Foundation

The Frisco RoughRiders are the Double-A affiliate of the Texas Rangers and play their games at beautiful Dr Pepper Ballpark in Frisco, Texas. The team was founded in 2003 and has finished first among all Double-A franchises in attendance in each of the last 13 seasons (2005-2017). In August 2014, the RoughRiders were purchased by an ownership group led by Chuck Greenberg. Since then, the new ownership group, together with the City of Frisco, has spearheaded numerous major franchise enhancements, investing over $8 million in a wide array of facility upgrades and improvements, including a state-of-the-art HD video board, sound system, Bull Moose Saloon, InTouch Grille, Riders Outpost Team Store and the world’s largest water feature in a sports facility, the massive Choctaw Lazy River. These enhancements earned the Riders and the City of Frisco Ballpark Digest’s prestigious “Best Ballpark Renovation” award for two consecutive years (2015 and 2016). More than 140 former RoughRiders players have gone on to play Major League Baseball, including All-Stars Chris Davis, Adrian Gonzalez, Ian Kinsler and Neftali Feliz, as well as current Rangers stars Elvis Andrus, Rougned Odor and Nomar Mazara. For more information on the Frisco RoughRiders and Dr Pepper Ballpark, please visit RidersBaseball.com or contact Ryan Rouillard at RRouillard@RidersBaseball.com.