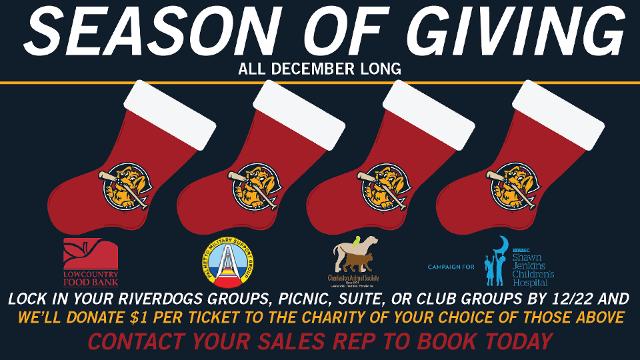 CHARLESTON, S.C. – It’s the “season of giving,” and the Charleston RiverDogs are getting in the holiday spirit. The club has pledged to donate a dollar to one of four local Lowcountry charities for each ticket sold as part of a group outing at The Joe for the upcoming 2018 season, through Friday, December 22.

For every group ticket plan of 25 or more, picnics of 50+, suite rental, and Riley Park Club group of 10+ sold by the 22nd, the RiverDogs will donate a dollar per ticket to either the Lowcountry Food Bank, Charleston Animal Society, the MUSC Shawn Jenkins Children’s Hospital, or the Palmetto Military Support Group at the choice of each customer.

In the same spirit of giving, the RiverDogs will also be offering holiday flex plan deals during the month of December. Packages start at just $50 and included five undated grandstand vouchers, good for almost any game during the 2018 season, along with the choice of a RiverDogs hat, shirt, or the option to donate $10 to one of the four charities. A package that includes ten undated vouchers will run at $85.

Ticket information on season tickets and groups, including the Riley Park Club, can be found on riverdogs.com/tickets and reserved with a sales representative by contacting the club at 843-723-7241.

RiverDogs season tickets, half-season ticket packages, and flex plans are now available for the 2018 campaign. The RiverDogs begin the season on April 12 when they host the Kannapolis Intimidators at Joseph P. Riley, Jr. Park, preceded by a weeklong road trip to open the year and an exhibition contest against Myrtle Beach at The Joe on April 3. Ticket information can be secured by contacting the box office at (843) 577-DOGS (3647) or online at www.riverdogs.com/tickets.