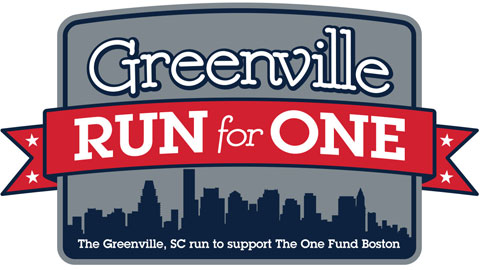 The Greenville Drive (Boston Red Sox affiliate), and emediagroup, along with the Caine Halter YMCA, Go Magazine, Set Up Events, and Fatz, have combined forces to coordinate a 2.62 mile, run/walk on June 12th to raise funds for The One Fund Boston – the official central fund to help the families affected by the tragic events that occurred at the Boston Marathon on April 15, 2013. 100% of proceeds raised will go to The One Fund Boston, who will distribute all collected donations to these families on June 30, 2013.

J.J. Swartz, Greenville Run for One event director and endurance sports team member at emediagroup, hopes to see Greenville runners, businesses and residents pull together to show Boston that the tragic turn of events in Boston have not gone unnoticed by the Upstate. “The bombing at the finish line of the Boston Marathon and the suffering and loss that followed, cannot be reversed or taken away. What we in Greenville can do though is show the city of Boston that we care about them and want to help in any way we can. It’s what we would hope for if the same thing were to happen in our city.”

Runners and walkers will start at the Caine Halter YMCA at 5:00pm. The 2.62 course will wind its way through Cleveland Park from the YMCA and have its own version of Boston Marathon’s “Heartbreak Hill”. Runners and walkers will finish by entering Fluor Field, running by its own version of the iconic Green Monster, and crossing home plate while high-fiving players and coaches from the Drive.

The Greenville Drive will provide all participants with a complimentary ticket to attend that evening’s 7:05pm ballgame between the Greenville Drive & the Charleston River Dogs. The Drive will continue to honor Boston during the ballgame by wearing commemorative jerseys with “Boston” across the front in the Red Sox font, along with the “B Strong” patch on one sleeve. These jerseys will be auctioned off throughout the game, with proceeds going to The One Fund Boston.

Since both emediagroup and the Greenville Drive have ties to Boston, the two had a common interest in making this event happen. “Boston Marathon Race Director Dave McGillivray and his team at DMSE have always been great to us at emediagroup,” said Bill Bishop, co-owner of emediagroup.

“The actions that occurred on April 15th were unthinkable, and rocked us all,” commented Drive Co-Owner and President, Craig Brown. “As an affiliate of the Boston Red Sox, this tragedy really hit home and the event on June 12th will serve as a rallying point for the Greenville Community to support those affected.”

Schedule of race day events are as follows:

For more information on The One Fund Boston visit www.onefundboston.org