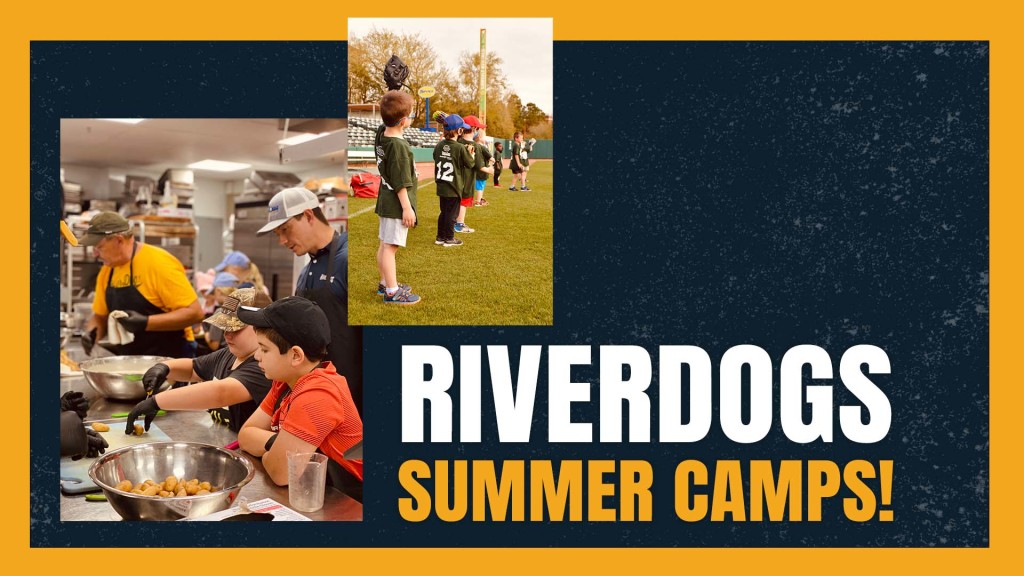 Whether children have dreams of becoming a star on the field or in the kitchen, The Joe has become the place to learn valuable skills during the summer. On Wednesday, the Charleston RiverDogs announced that registration is open for a full schedule of youth baseball and culinary camps hosted by the team.

The RiverDogs will hold five baseball camps this summer, each featuring daily sessions Monday-Friday from 8:30 a.m.-12:30 p.m. The camps include stations in hitting, pitching, base running, speed and agility, warm-up and stretching, and fundamentals. Camps are open to children ages 6-13. Weekly registration is $315 per camper, while individual day sessions can also be purchased for $70 each.

Chris Singleton, the RiverDogs Director of Community Outreach and former professional baseball player, and his team will lead the quartet of camps in June, July and August. Singleton was a standout outfielder at Goose Creek High School and Charleston Southern University which led to the Chicago Cubs drafting him in 2017. He spent two seasons playing in the Cubs farm system.

“The RiverDogs have always made it part of our mission to instill a love of baseball in future generations and baseball camps are a big part of that effort, said RiverDogs president Dave Echols. “Chris and the other instructors do a great job of teaching baseball fundamentals while having fun. There is never a shortage of smiles around the ballpark on camp days.”

The team will also host three unique culinary camps this summer. A Segra Club Culinary Camp in June will focus on preparing meals that would be primarily served in an upscale environment. A Food Truck Camp from the end of June to the first of July will educate campers on making fun street foods in an outdoor setting. Finally, the RiverDogs Concession Camp in August will teach participants how to make some of the fan-favorites that are served in the concession stands on gamedays.

The one-week camps will feature daily sessions running from 8:30 a.m. to 12:30 p.m. Each day will begin with proper station set-up, include basic cooking skills and conclude with a new lunch dish, which the campers will dine on. Culinary camp is $350 per camper for the week.

The culinary camps will be directed by RiverDogs Vice President/Food and Beverage Josh Shea. Shea served as the Food and Beverage Director for the RiverDogs from 2013-18 and spent the 2019 season with the Augusta GreenJackets before returning to Charleston in the winter of 2019. He gained culinary experience as the catering chef at Tidewater Catering while also spending time at Triangle Bar and Char and Halls Chop House.

“I am looking forward to hosting three unique camps that will provide kids an opportunity to learn about the different aspects of the RiverDogs dining experience,” Shea said. “Since their debut back in 2020, these camps are circled on my calendar each season. The excitement that learning something new brings to the faces of these children is awesome to witness and be a part of.”

Registration for all youth summer camps is open now. Click Here to register.

The RiverDogs will open the 2022 season at home against the Myrtle Beach Pelicans on Friday, April 8. Season tickets, flexible ticket plans, and group tickets, including options to the Segra Club at Riley Park, are available at riverdogs.com/tickets or by contacting the RiverDogs front office at 843-577-3647 (DOGS). The Segra Club is also open for events year-round. Visit segraclub.com for more information.