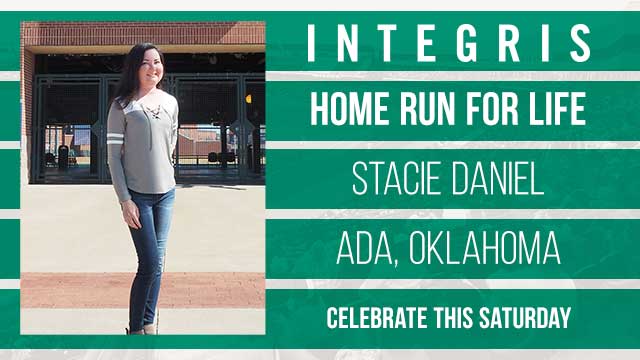 OKLAHOMA CITY – The Oklahoma City Dodgers and INTEGRIS open the 2018 “Home Run For Life” series Saturday at Chickasaw Bricktown Ballpark by recognizing Stacie Daniel, who was born with cystic fibrosis and placed on the lung transplant list at age 29.

Cystic fibrosis is a “progressive, genetic disease that causes persistent lung infections and limits the ability to breathe over time,” according to the Cystic Fibrosis Foundation website.

Daniel’s lungs were functioning at just 30 percent capacity by the time she was 25 years old. After nine months of waiting on the transplant list, Daniel received a double lung transplant in August 2017 at Nazih Zuhdi Transplant Institute at INTEGRIS Baptist Medical Center.

The avid hunter is now back to enjoying the sport – and the time outdoors – that she loves.

“Home Run For Life” recognizes individuals in the Oklahoma City community who have overcome a significant medical event with the help of their families, physicians and health care professionals. To symbolize the end of their battle against adversity, honorees take a home run “lap” around the bases during an in-game ceremony.

“For the eighth straight year, we are proud to partner with INTEGRIS to recognize some amazing Oklahomans who have faced extraordinary adversity with their health,” OKC Dodgers President/General Manager Michael Byrnes said. “Their perseverance and courage are great examples and we are pleased to have the opportunity to honor their hard work in overcoming these challenges.”

Daniel loves hunting, water sports, fossil hunting and traveling – basically anything that allows her to be outdoors and surrounded by nature. But cystic fibrosis threatened her passion – and her life. She was born with the disease that leads to lung damage and respiratory failure and also prevents the body from releasing digestive enzymes that break down food to absorb vital nutrients, according to the Cystic Fibrosis Foundation website.

“I remember my mom being in tears when I was diagnosed at six years old,” Daniel said. “They told her to love me while she could and pretty much wrap me in a bubble because the life expectancy at that time for someone with CF was 10 to 12 years.”

As a child, Daniel’s issues were mainly digestive. She didn’t start experiencing lung problems until she was a teenager. That’s when her disease started to progress and her lungs were struggling to function. She would experience coughing fits that could last 45 minutes to an hour.

After nine months on the transplant list, she received a double lung transplant at Nazih Zuhdi Transplant Institute at INTEGRIS Baptist Medical Center.

Daniel, 31, is now back to enjoying the outdoors and living life.

“Stacie is an ideal patient – compliant and full of drive and dreams,” Mark Rolfe, M.D., said. “She is the kind of patient that every transplant pulmonologist loves because she is so easy to take care of and takes advantage of the transplant to live life to its fullest.”

According to the Cystic Fibrosis Foundation website, significant progress has been made in treating the disease, but there is still no cure.

“I will always have CF and the sinus and digestive issues that go along with it,” she said. “But the disease cannot get into my new lungs and it’s the respiratory issues that are the most fatal. So, my prognosis is great and because of my donor and the generosity of his or her family, I truly have been given a second chance at life.”

The OKC Dodgers continue their first homestand of the season with Opening Weekend events starting at 7:05 p.m. against the Round Rock Express at Chickasaw Bricktown Ballpark on a $2 Thursday, featuring $2 Pepsi products and select beer.

The Dodgers then open a four-game home series against New Orleans at 7:05 p.m. Friday, with several special commemorative pregame events scheduled with the Oklahoma City Police Department and fireworks, presented by True Sky Credit Union, to follow the game.

The homestand then wraps up with a 7:05 p.m. game Monday.

Tickets are available through the OKC Dodgers ticket office located on South Mickey Mantle Drive, by phone at (405) 218-2182, or by visiting okcdodgers.com.