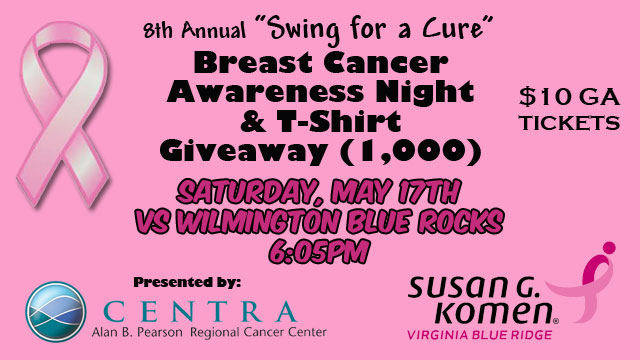 The Hillcats will have everyone wearing pink on Saturday, May 17th will the 8th Annual “Swing For A Cure” Breast Cancer Awareness Night presented by Centra’s Alan B. Pearson Regional Cancer Center! Proceeds from this event will benefit the Susan G. Komen For the Cure Foundation.

General admission tickets for the 6:05pm game against the Wilmington Blue Rocks will be $10, with a portion of each ticket being donated to the fight against cancer. Plus, the first 1,000 fans through the gates will receive a free pink t-shirt! All Hillcats players will don pink commemorative jerseys which will then be up for bid during a silent auction during the game.

It’s estimated that there will be 232,670 reported new cases of invasive breast cancer in the United States in 2014 and as many as 1 in 800 women in Virginia alone, may be diagnosed each year. The Susan G. Komen Foundation was created in 1982 by Komen’s sister and has since raised $2.5 billion for research, treatments, and support for survivors.

To purchase tickets to the “Swing For A Cure” Breast Cancer Awareness Night or any other game, fans can call the box office at (434) 528-1144 or go online. Ticket purchases can also be made in person at the Lynchburg City Stadium Ticket Office (Mon-Fri, 9am-5pm).

This article originally appeared on the official website of the Lynchburg Hillcats. Click here to view the original story.