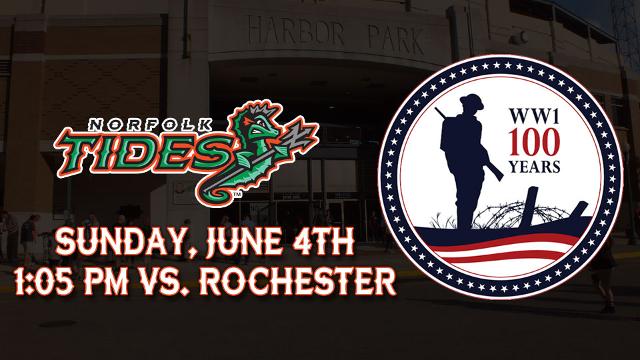 To mark the 100th Anniversary of America’s joining World War I, the Norfolk Tides will join with the US World War One Centennial Commission and teams across the International League to honor the veterans of World War I on Sunday, June 4th during that day’s 1:05 game against the Rochester Red Wings.

“The military is such an integral part of the Hampton Roads area, so any time we get a chance to commemorate those who serve and protect our freedom we’re honored to do so” said Tides General Manager Joe Gregory.

The U.S. World War I Centennial Commission is a Congressional Commission, created to provide public outreach, education programs, and commemorative events for America’s involvement in World War I. Congress also authorized the Commission to create the new National World War I Memorial in Washington DC.

The WW1CC is also active on the state level, working with the WW1 Commission of Virginia along with veteran leaders, elected officials, historians and youth groups in honoring the veterans of WW1.

The WW1CC’s Executive Director, Dan Dayton, is thrilled by the partnership with the International League teams. “This is a great opportunity for the World War I Centennial Commission, to partner with the people of the league, the teams, and with the fans, to remember these American veterans, and what they did for us all”.

Randy Mobley, President of the International League agreed: “The story of baseball has roots in World War I, and the story of World War I has close ties with baseball. One hundred years ago, hundreds of professional and semi-professional players put their baseball careers on hold in order to serve overseas in the war, including Ty Cobb, Christy Mathewson, and Eddie Grant. The International League is proud to partner with the WW1CC on this important commemoration and it is fitting that baseball be part of our national tribute to those who served in WW1.”

More information on the World War I Centennial Commission can be found here: ww1cc.org.