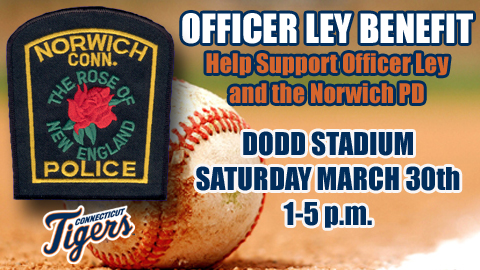 Norwich, CT – A benefit honoring recently wounded Norwich Police Officer Jonathan Ley and the Norwich Police Department will take place Saturday, March 30, 2013 from 1 p.m. to 5 p.m. at Dodd Stadium. Officer Ley’s benefit will celebrate courage, bravery and valor. Monies raised will benefit Officer Ley and his everyday living costs. Additionally, a portion of the proceeds will be donated to the Norwich Police Department to increase their supply of combat tactical gear for their officers.
The event includes the area’s best food provided by Norwich and the surrounding towns, a softball game featuring the Norwich Police and the Norwich Fire Departments, music provided by the band “Malena”, a gamut of raffles, drinks and more!
This is an event for the entire family with a bounce house, petting zoo, egg hunt and more! Saturday, March 30 is a day for families to unite and support one another and especially, the men and women who risk their lives, every day, to ensure our safety.
To purchase tickets for the event at Dodd Stadium in support of Officer Jonathan Ley and the Norwich Police Department, please call (860) 887-7962 and press 0 to speak with a box office representative. For more information, visit www.officerleybenefit.com.
Officer Ley was wounded in the line of duty on January 7, 2013 in Norwich, Connecticut. Officer Ley was first transported to Backus Hospital but then, hospital officials took him by ambulance to Yale New Hospital. From there, Doctors performed necessary procedures for Officer Ley.  His current condition is good, but there is still a long road to recovery for this local hero.
The Connecticut Tigers are the Class-A affiliate of the Detroit Tigers and play in the New York-Penn League. The Tigers will host the 2013 New York-Penn League All-Star Game on Tuesday, August 13. Tickets for this event, as well as season tickets and mini-plans for the 2013 season are on sale now. The Box Office is open 9 a.m.-5 p.m. Monday through Friday. In addition, tickets can be purchased over the phone at (860) 887-7962. For more information go online to cttigers.com.
This article originally appeared on the official website of the Connecticut Tigers. Click here to view the original story.