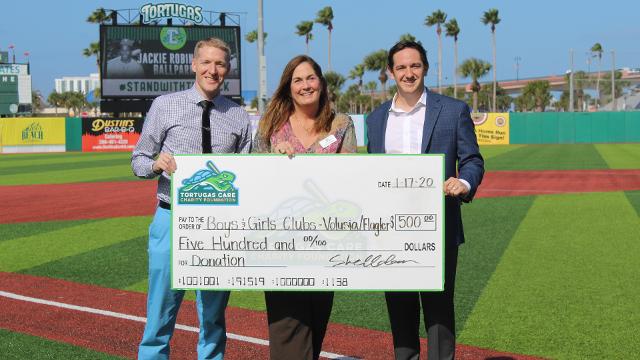 DAYTONA BEACH, Fla. – The Daytona Tortugas have announced a 12-week campaign of charitable donations to give back to the community that has stood steadfastly with the team in its quest to keep affiliated professional baseball at historic Jackie Robinson Ballpark in Daytona Beach.

The Tortugas Care Charity Foundation, the team’s philanthropic organization that supports local youth sports and sea turtle conservation initiatives, will make a financial contribution to a deserving community organization each week leading up to April 9, the 2020 season’s Opening Day. Recipients will be selected through an open application process that will begin immediately.

The Tortugas decided to launch the 12 Weeks of Thanks campaign after being overwhelmed with support from the community in the wake of news that Daytona is one of 42 communities slated to lose affiliated professional baseball under a plan put forward by Major League Baseball that would take effect in 2021.

“We have been overwhelmed by the outpouring of support we’ve received from the community to ‘Save our Tortugas'” said Tortugas co-owner Bob Fregolle. “From the support we’ve gotten from local government, the media, and the fans, it’s meant a lot to us as we do everything we can to save baseball here in Daytona. This seemed like a wonderful way to say ‘Thank You’ and to generate even more momentum as we head into what promises to be an amazing season at The Jack.”

To start off the campaign, the Tortugas will make a donation to the Boys & Girls Clubs of Volusia/Flagler. Boys & Girls Clubs of Volusia/Flagler operate in eight communities in the areas of greatest need within Volusia and Flagler counties and provide young people with adults who respect and listen to them, a safe environment, and constructive activities that channel youthful energy into challenging pursuits. The Tortugas are proud to support their efforts.

“The Tortugas organization is a great partner for the Boys & Girls Club and the Daytona Beach community,” said Joe Sullivan, Chief Professional Officer of the Boys & Girls Clubs of Volusia/Flagler Counties. “They have made it possible for our kids and families to attend games and provided financial support for our clubs. Our Daytona Tortugas are involved champions of our organization and area.”

Organizations that would like to be considered for subsequent contributions during the Tortugas’ 12 Weeks of Thanks campaign should contact Josh McCann, Community Relations & Outside Events Manager, by emailing [email protected].

The Tortugas begin the 2020 season on April 9th against the Florida Fire Frogs. Jackie Robinson Ballpark and the Daytona Tortugas will host the Florida State League All-Star Game on Tuesday, June 23rd. For more information, contact the team at 386-257-3172 or visit the Tortugas website at www.daytonatortugas.com.