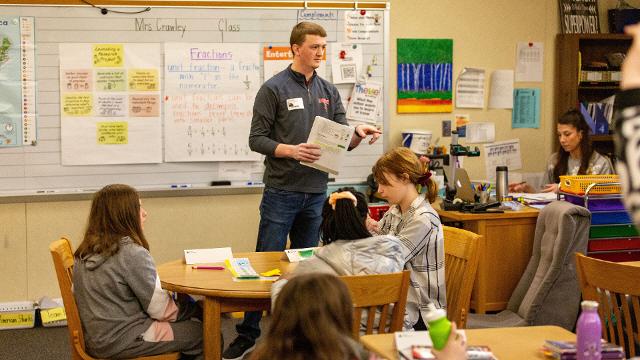 INDIANAPOLIS – Today the Indianapolis Indians spent the day with the fourth graders of Sand Creek Elementary School. The Tribe front office volunteered their time teaching Junior Achievement’s JA In A Day curriculum on owning and operating a business.

“The Indianapolis Indians fully support Junior Achievement’s mission of preparing Central Indiana youth for a future career, no matter the path,” said Indianapolis Indians President and General Manager Randy Lewandowski. “There’s nothing more important than an education. We’re committed to supporting the children in our community by volunteering and providing resources to help them grow into our leaders of tomorrow.”

“JA is thrilled to have established a strong partnership with the Indianapolis Indians to educate and inspire students to own their future success. This JA Day event is an exciting opportunity to make a big difference in the lives of these young students in a single day,” said Jennifer Burk, JA’s President and CEO.

About the Indianapolis Indians
The Indianapolis Indians are the professional Triple-A baseball club affiliate of the Pittsburgh Pirates. In continuous operation since 1902, the organization believes in creating affordable and memorable experiences for fans so they can grow closer together with family, friends and the community through the game of baseball. The Indians play their home games at Victory Field, a 13,750-seat ballpark located in downtown Indianapolis and White River State Park. The venue opened in 1996 and has received numerous national accolades as one of the best minor league ballparks in the United States. The team has led Minor League Baseball in combined total attendance over the past 10 seasons. In 2018, the organization was recognized as Ballpark Digest Team of the Year. It was also named a 2019 Best Places to Work by the Indiana Chamber of Commerce.