Franchise tapped by United States Office of the Secretary of Defense for July 4th, 2014 Game 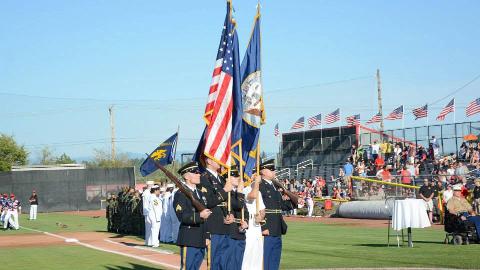 KEIZER, Or. – The Salem-Keizer Volcanoes are proud to announce its acceptance as a Commemorative Partner of the 50th Anniversary of the Vietnam War. The Volcanoes’ 7th Annual Patriotic celebration is headlined on Friday, July 4, 2014 with Vietnam Veterans Night at Volcanoes Stadium.

The Salem-Keizer Volcanoes’ initial patriotic celebration was on July 4, 2008, and has since grown into a three-day annual event celebrating the many cross-sections of our military heroes, and has boomed with success. During these tributes, the Volcanoes have Thanked, Honored, and Saluted more than 300 military men and woman spanning from World War II to the Middle East conflicts. Great anticipation surrounds the next chapter of the Tribute spanning the Independence Day weekend of Friday, July 4th to Sunday, July 6th.

In 2013, Volcanoes Stadium hosted a special ceremony for “Fallen Navy SEAL” Tyrone Woods of Oregon City, who was killed in combat defending America’s diplomatic outpost in Benghazi. At the time of the formal ceremony, there were 143 military personnel on the field including representatives from Washington D.C..

Jerry Howard, Volcanoes’ Senior Marketing Representative, whom organizes this yearly event, expressed his appreciation for the Volcanoes’ selection: “The Volcanoes are extremely excited with regard to being selected by The Office of the Secretary of Defense to be an official Vietnam War 50-Year Commemoration Partner” and site. We have many brave and courageous Vietnam War Veterans in Oregon and Southwest Washington who we will invite to join us on July 4th, 2014, so we may properly Thank, Honor and Salute them for their service to our country. They are truly American Heroes.”

The Volcanoes were awarded this honor as a part of the franchise’s willingness to assist and support a grateful nation in thanking and honoring our Vietnam War Veterans and their families.

In preparation for the 2014 Patriotic Tribute, the Volcanoes have selected an 18-member committee of Vietnam Veterans to plan the event at Volcanoes Stadium. If you know of any Vietnam Veterans who deserve recognition during the special celebration, nominations can be made to the committee by contacting Jerry Howard. He can be reached at Volcanoes Stadium at 503-779-4088 or via email at j.howard@volcanoesbaseball.com.

About the Volcanoes: The Salem-Keizer Volcanoes are a minor league affiliate of the San Francisco Giants. Home games are played at Volcanoes Stadium in Keizer from mid-June through early-September. For more information call the Volcanoes at (503) 390-2225.

This article originally appeared on the official website of the Salem-Keizer Volcanoes. Click here to view the original story.