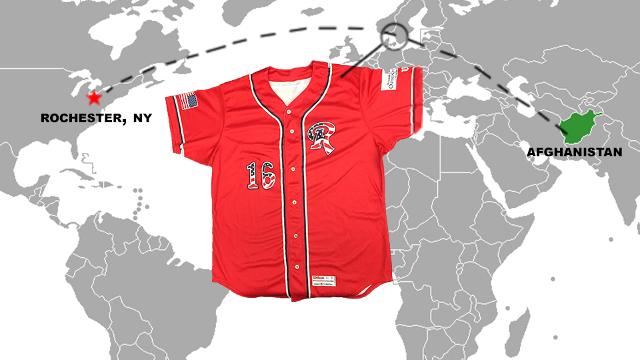 That’s the distance between Rochester and Afghanistan. That distance would take you from New York to L.A. and back to Des Moines, Iowa.

Jose Berrios has memorabilia that resides there, but he doesn’t know it.

On the Fourth of July a season-high 11,574 spectators filed into Frontier Field as the Wings dropped a 5-2 decision to Buffalo. That night Rochester donned patriotic threads that were silent auctioned following the game to benefit the Veteran’s Outreach Center in Rochester.

Gracious fans raised $3,380 on Independence Day to lay claim to the unique game worn Wings artifacts. Many of the jerseys can be seen worn by fans around the park while others have them framed in their homes.

Jose Berrios’ jersey won’t be seen by anybody for quite some time because his is currently 6,673 miles away in Afghanistan.

Danny Cashman has been in the military since 2005 where he joined as a military police officer and was sent to Fort Leonard Wood in Missouri for one station unit training. Later that year he was sent to Fort Benning in Georgia where he participated in jump school as a paratrooper in the 82nd airborne. He was then stationed in Fayetteville, North Carolina before being stationed in Afghanistan for 15 months from 2007-08.

There is not a lot to do in down time while overseas. One day Cashman was sent a baseball and he went out in the field with the guys and played with it. Soldiers were sent soccer balls and they played with those. Practically anything over there could be used to goof off and have a good time.

Now, Cashman sends whatever he can get his hands on overseas. Upon his return in 2008 he has been collecting game-used baseballs, bats, and a game-used base from a Red Wings game that hangs in the dining hall of his former base. He’s also sent over basic supplies like socks and T-shirts because at the end of the day he knows anything is appreciated.

“The baseball stuff (we received) was a surprise and it was like ‘Hey this is awesome!’ Stuff like that sent to any solider packages would be utilized and it was nice. Unless you have a family member or friends sending you things it can be tough and you don’t know what you are going to get. Being able to keep their morale up is huge.”

The duo both thoroughly enjoy the movie The Replacements and quarterback Shane Falco sports #16 in the film so the number has stuck for the two men.

So while the $3,380 is going to help war veterans in Rochester, the jerseys themselves are having an impact themselves over 6,000 miles away.