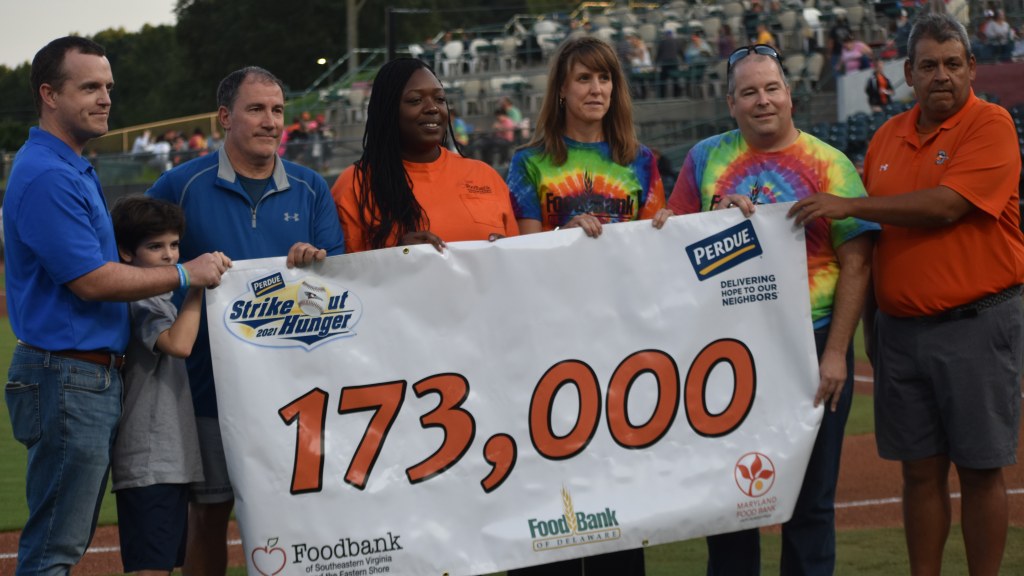 SALISBURY, MD. (Tuesday, September 22, 2021) — As part of Perdue Farms’ “Delivering Hope To Our Neighbors®” hunger-relief initiative, the company teamed with the Delmarva Shorebirds minor league baseball team and three Delmarva Peninsula food banks to deliver 173,000 meals across the region’s communities in the season-long 2021 Perdue Strike Out Hunger Challenge on Delmarva.

“The impact of the pandemic has brought so much uncertainty and challenge to individuals and families struggling with food insecurity on the Delmarva Peninsula,” said Kim Nechay, executive director of the Franklin P. and Arthur W. Perdue Foundation. “After pausing the Strike Out Hunger Challenge last year because of the pandemic, we’re pleased that this year’s campaign once again provided a collaborative platform to raise public awareness about the problem of hunger and food insecurity and deliver much-needed relief to our neighbors in the communities where we live and work.”

According to research from the food banks, on average one in seven people on the Delmarva Peninsula are challenged by food insecurity. One third of that food-insecure population is children.

Since 2011, Perdue, the Shorebirds, food banks and the community at-large have embraced the Strike Out Hunger Challenge to generate more than 1.2 million meals for those in need on Delmarva.

“The Delmarva Shorebirds are so proud of this collaborative partnership that continues to put food on the table for so many of our neighbors in need during these difficult times,” said Jimmy Sweet, assistant general manager of the Delmarva Shorebirds. “We look forward to continuing our work with Perdue in this important effort to improve the quality of life on Delmarva.”

To drive this year’s Perdue Strike Out Hunger Challenge on Delmarva, Perdue Farms issued a $15,000 challenge grant funded by the Franklin P. and Arthur W. Foundation — the charitable giving arm of the company — to benefit the Eastern Shore Branch of the Maryland Food Bank, the Food Bank of Delaware and the Foodbank of Southeastern Virginia and the Eastern Shore.

Each of the food banks were required to engage the Delmarva community to raise the equivalent of 10,000 meals in order to claim their equal share of the first $10,000 of the Foundation challenge grant. This included any combination of pounds of food collected, monies collected and donated, or volunteer hours throughout the duration of the Shorebirds’ season. Perdue also donated $10 for each time the Shorebirds’ pitchers struck out an opposing batter, up to $5,000.

“This annual campaign remains a pivotal part of the Maryland Food Banks’ ability to meet the needs of those who struggle to feed their families,” said Jennifer Small, senior regional program director for the Eastern Shore branch of the Maryland Food Bank. “As a result of our longstanding partnership with Perdue Farms and the Delmarva Shorebirds, and the support committed through the Perdue Strike Out Hunger Challenge on Delmarva, we are able to provide more food to Eastern Shore Marylanders challenged by food insecurity.”

As Chad Robinson, community relations manager for the Food Bank of Delaware, explains, “We are so grateful for Perdue’s leadership with this annual initiative. Partners like Perdue play a critical role in not only raising much needed funds, but bringing awareness of the critical issue that so many in our community face.”

The premium protein portfolio within our Perdue Foods business, including our flagship PERDUE® brand, Niman Ranch®, Panorama Organic Grass-Fed Meats®, Coleman Natural®, and Yummy®, as well as our pet brands, Spot Farms® and Full Moon®, is available through various channels including retail, foodservice, club stores, and our direct-to-consumer website, PerdueFarms.com.

Perdue AgriBusiness is an international agricultural products and services company.

Now in our company’s second century, our path forward is about getting better, not just bigger. We never use drugs for growth promotion in raising poultry and livestock, and we are actively advancing our animal welfare programs. Our brands are leaders in no-antibiotics-ever chicken, turkey, pork, beef and lamb, and in USDA-certified organic chicken and beef. Learn more at Corporate.PerdueFarms.com.

About the Delmarva Shorebirds

The Delmarva Shorebirds were founded in 1996 and have been the Class-A affiliate of the Baltimore Orioles since 1997. The Shorebirds have won two South Atlantic League championships in 1997 and 2000 and were named the MiLB.com Minor League Team of the Year in 2019 after going 90-48 in the regular season. Based in Salisbury, Maryland, the Shorebirds are proud to represent the entire Delmarva Peninsula and have hosted two SAL All-Star Games in 1999 and 2011. The Shorebirds are owned by 7th Inning Stretch, LP, based in Stockton, California headed by Chairman Tom Volpe and President Pat Filippone.