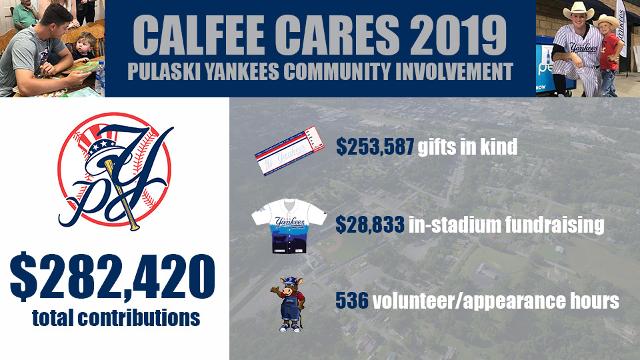 PULASKI, Va. – The Pulaski Yankees today announced the organization made over $282,000 in charitable contributions during the 2019 calendar year, an increase of over $250,000 from 2018. Through the new Calfee Cares community relations program, the Yankees made $253,587 in gift in kind donations and $28,833 in cash donations from in-stadium fundraising efforts.

“When we introduced Calfee Cares in May of 2019, our goal was to prioritize our community relations efforts and continually find and create opportunities to give back to the fans, businesses, and community organizations in Pulaski who support us all season long,” said Pulaski Yankees General Manager Betsy Haugh. “We could not be more thrilled with the results from 2019 and the contributions our organization and players made last season.”

22 of the team’s 34 regular-season home games had a community tie, most notably Agriculture Night 2.0 presented by Farm Credit of the Virginias which led to a $4,250 donation to the Virginia Tech Agriculture Extension and Pulaski County 4-H, and fan favorites such as Heroes Night (SERVPRO of Pulaski County) and Military Appreciation Night (Pulaski Health & Rehabilitation Center).

Season tickets and flex packs are now on sale for the 2020 Pulaski Yankees season, which gets underway at Motor Mile Field at Calfee Park on June 22. Tickets can be purchased online at pulaskiyankees.net, by phone at (540) 980-1070, or in person at the Calfee Park offices. Individual game tickets will go on sale on April 1.

The Pulaski Yankees are the Advanced Rookie level affiliate of the New York Yankees playing in the Appalachian League. Pulaski is celebrating its 54th season in the Appalachian League in 2019. Calfee Park has won league championships in 1948, 1969, 1986, 1991 and 2013. Motor Mile Field at Calfee Park opened in 1935 and was renovated for the team’s first season as a Yankees affiliate in 2015. The Pulaski Yankees were named the recipient of the John H. Johnson President’s Award, Minor League Baseball’s top honor, in 2019. For more information, please visit www.pulaskiyankees.net or follow the Pulaski Yankees on social media, @PulaskiYanks (Twitter, Facebook, and Instagram). This story was not subject to the approval of the National Association of Professional Baseball Leagues or its clubs.

(Reading, PA) – The Reading Fightin Phils, proud double-A affiliate of the Philadelphia Phillies, have announced they will be hosting Agricultural Appreciation Night to stop the Spotted Lanternfly on Tuesday, June 26th at 7:15 p.m. at FirstEnergy Stadium. The first 2,000 adults will receive a Fightin the Spotted Lanterfly T-Shirt courtesy of Anewalts Landscape Contracting and Clover Hill Vineyards and Winery.

Since 2014, the Spotted Lanternfly has threatened the state’s grape, fruit tree and logging industries. Adult lanternflies have a black head and grayish wings with black spots and their body seems to glow red. They have been a threat to the local wine industry because of their negative impact on grapes.

“Although beautiful, the spotted lanternfly can do immeasurable damage to our local and greater community,” said Lori Anewalt, owner of Anewalt’s Landscape Contracting. “It is our duty to be on the cutting edge of what a lanternfly can do and to treat it with great urgency. We are deeply concerned about the future of the fruit industry, especially that of Clover Hill Winery being that they are close family of the Anewalt’s.”

At the game, State Sen. Judy Schwank will have a table with informational flyers about the spotted lanternfly.

“The spotted lanternfly is a serious problem and is having a huge impact on our communities and on our farmers,” Schwank said. “Everybody needs to be engaged on this issue. Come out on June 26 to learn more.”

The Pennsylvania Department of Agriculture has three steps to help eradicate the spotted lanternfly:

3.      If you are in a new area report it to the Pennsylvania Department of Agriculture (PDA) by emailing [email protected] or call the Invasive Species Hotline at 1-866-253-7189

America’s Classic Ballpark is proud to be a part of Pennsylvania’s Americana Region. Individual and season tickets for the 2018 season are available online at Fightins.com, by phone at 610-370-BALL, and in-person at FirstEnergy Stadium. Follow the Fightin Phils on Twitter at @ReadingFightins and like them on Facebook via www.facebook.com/fightins.