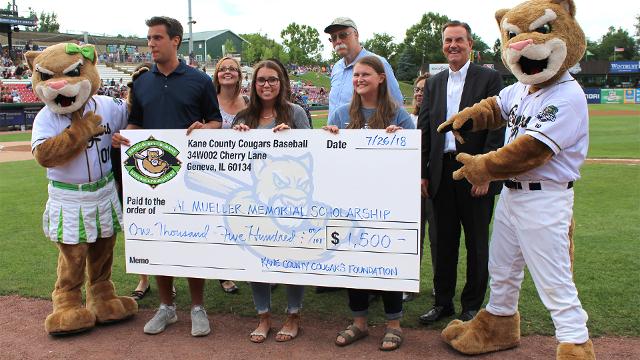 GENEVA, Ill. – The Kane County Cougars have been nominated by the Midwest League for the John Henry Moss Community Service Award.

The award is presented to a Minor League club which demonstrates a commitment to charitable service as well as support and leadership within their local community and the baseball industry.

Community impact has been one of the pillars of the Cougars organization since 1991, but prior to the 2018 season the Kane County Cougars Baseball Foundation, Inc. launched a historic fundraising goal known as “A Million Smiles Campaign.” The first campaign of its kind in the history of MiLB, the Foundation worked towards reaching a donation total of one million dollars with each dollar donated providing a welcome smile for those in need. Reaching above and beyond that milestone this season marks the first time in the Cougars 28 year history that the one million dollar donation total has been achieved with the expansion of various programs including:

Nominees from all leagues are reviewed by the MiLB Awards Committee and recommendations are presented to the President and Executive Vice President of MiLB for the final decision. The winner will be announced at the Winter Meetings in December.

The Cougars, Class-A Minor League affiliate of the Arizona Diamondbacks, have been at the forefront of family-friendly entertainment since 1991. In 2015, the franchise became the first Class-A team in Minor League Baseball history to welcome 11 million fans through the gates. A total of 171 former Cougars have reached the Major Leagues including Miguel Cabrera, Nelson Cruz, Josh Beckett, Adrian Gonzalez and Kyle Schwarber.