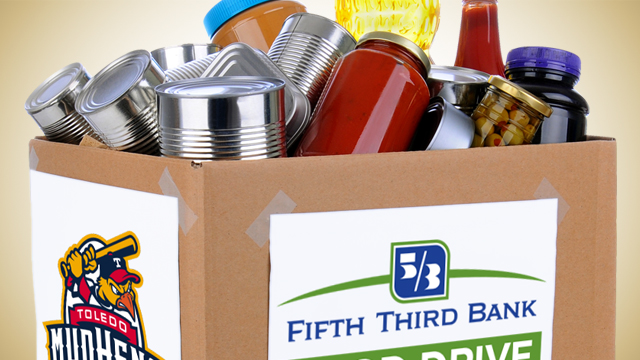 Did you know an estimated 50 million Americans go hungry every day, including one child out of every five in this country? To help raise awareness and inspire action, Fifth Third Bank and the Mud Hens are teaming up to collect food during the May 26-June 2 homestand in support of the Food for Thought program in Northwest Ohio.

Fans attending the Mud Hens home games between Monday, May 26 and Monday, June 2 are encouraged to bring non-perishable food items to the ballpark. Boxes will be readily available at all entrances.

Fifth Third chose the food drive as this year’s bank-wide service project in honor of Fifth Third Day which occurs annually on May 3. Fifth Third Bank will celebrate Fifth Third Day at the Ballpark on Saturday, May 31 during the Food Drive. During the past two years, Fifth Third employees provided more than 890,000 meals to those in need. For 2014, each of the Bank’s affiliates has created its own plan to fight hunger, with the goal of providing at least 530,000 meals.

Food for Thought is a social justice non-profit dedicated to feeding the hungry and offering dignity, welcome and relationship to anyone in need. The group operates a stationary food pantry in Oregon and a mobile pantry which visits 17 fixed locations around the Toledo area every month.

This article originally appeared on the official website of the Toledo Mud Hens. Click here to view the original story.