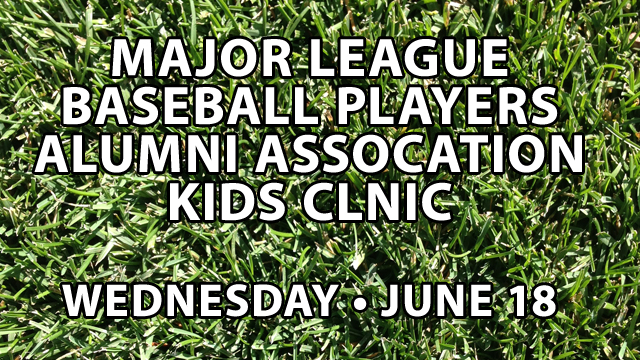 Kids will have an opportunity to play with their big-league heroes at the Major League Baseball Players Alumni Association Legends for Youth baseball clinic series on Wednesday, June 18, at Principal Park. The free clinic features former major-league baseball players who will teach baseball skills, drills and life lessons for kids ages 6-16.

The clinic will take place at Principal Park from 9-11 a.m. Players will train at stations including pitching, catching, base running and life skills. Registration will begin at 8:30 a.m. The morning will conclude with an autograph session for children in attendance.

To register for this clinic, please visit www.baseballalumni.com. Registration is required.

For more information regarding the clinic, please contact Nikki Warner, Director of Communications, at (719) 477-1870, ext. 105 or visit www.baseballalumni.com.

About The Major League Baseball Players Alumni Association (MLBPAA)
MLBPAA was founded in 1982 with the mission of promoting baseball, raising money for charity and protecting the dignity of the game through its Alumni players. The MLBPAA is headquartered in Colorado Springs, CO with a membership of more than 6,900, of which approximately 5,300 are Alumni and active players. Alumni players find the MLBPAA to be a vital tool to become involved in charity and community philanthropy. Follow @MLBPAA for Twitter updates.