OceanFirst Foundation has now donated over $160,000 to military-based non-profit organizations through the program 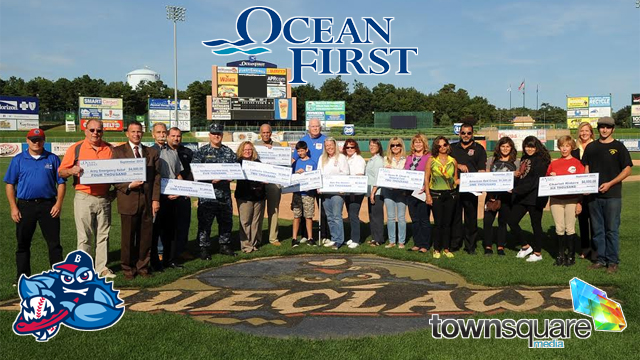 OceanFirst Foundation donated $34,000 to a group of military-based non-profit organizations based on each BlueClaws home run at FirstEnergy Park as part of the 2014 Home Runs for Heroes program.

Checks were preseneted in a ceremony on the field at FirstEnergy Park on Monday.

Each organization was paired up with one specific inning. Each the BlueClaws hit a home run at FirstEnergy Park, OceanFirst Foundation donated $1,000 to the corresponding organization. Fundraising totals are listed below.

In the table above, please note that both Chariot Riders and the NJ State Family Readiness Council received $6,000 for the six home runs the BlueClaws hit in the second inning at home this year.

Dylan Cozens led all BlueClaws with eight home runs at FirstEnergy Park, while three players – Mitch Walding, Andrew Pullin, and Wilmer Oberto – each hit three. Jim Murphy, who hit seven home runs in Lakewood in 2009 and 11 more in 2011, has accounted for $18,000 in donations and is the program’s all-time leader.