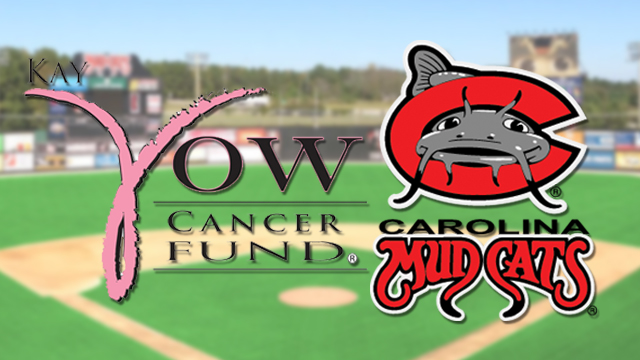 ZEBULON, NC – The Carolina Mudcats, the Class A Advanced affiliate of the Atlanta Braves and member of the historic Carolina League, are proud to announce the Kay Yow Cancer Fund as an official partner of the “Strikeout Cancer Weekend” event being held at Five County Stadium on May 15, 16 and 17 when the Mudcats play the Myrtle Beach Pelicans.

The Kay Yow Cancer Fund and the Mudcats also plan on honoring cancer survivors before the game with a unique on field ceremony. Fans hoping to participate, or wishing to nominate a friend or relative for participation in the ceremony should contact Mr. Brewington or Mr. Freeman at (919) 269-2287.

Kay Yow was first diagnosed with breast cancer in 1987, and passed away on January 24, 2009, after facing her third bout with the disease. Before her death, she joined forces with the Women’s Basketball Coaches Association (WBCA) and The V Foundation for Cancer Research to form the Kay Yow Cancer Fund, a 501 (c)(3) charitable organization committed to being a part of finding an answer in the fight against women’s cancers through raising money for scientific research, assisting the underserved and unifying people for a common cause.

For more information on the Kay Yow Cancer Fund or to make a donation, please visit www.kayyow.com and follow them on social media @kayyowfund.

“Strikeout Cancer Weekend” at Five County stadium will take place May 15, 16 and 17 when the Mudcats play the Myrtle Beach Pelicans. Mudcats players will wear specially designed jerseys for all three games in the series. Those game worn jerseys will then be made available to fans through a special auction.

All of the proceeds from the jersey auction will be donated to local cancer-fighting charities including the “Kay Yow Cancer Fund,” the “Vs. Cancer Foundation” and “Ed Randall’s Fans for the Cure.”

The Carolina Mudcats are the Class A Advanced affiliate of the Atlanta Braves. The 2015 “Braves New World” season is the first for the Mudcats as an affiliate of the Atlanta Braves and their fourth straight in the historic Carolina League. First established in 1991, the Carolina Mudcats are entering their 25th straight season of baseball at Five County Stadium in Zebulon, N.C. Fans can purchase tickets or find more information by calling (919) 269-2287 or by visiting www.carolinamudcats.com.

This article originally appeared on the official website of the Carolina Mudcats. Click here to view the original story.