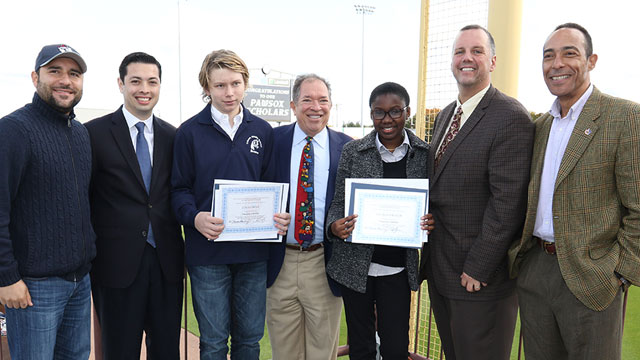 PAWTUCKET, RI – The Pawtucket Red Sox and the PawSox/Skeffington Charitable Foundation today announced the creation of the PawSox

Scholars program, in which two middle school students each receive college scholarships of $10,000 from the PawSox/Skeffington Charitable Foundation. The funds will be paid directly to the colleges of their choice for tuition and books upon matriculation.

The children include one from Pawtucket and one from neighboring Central Falls.

Charlisa Kollie, 13, an 8th-grader at Pawtucket’s Samuel Slater Junior High School, and Ethan Hoke, 14, an 8th-grader at Central Falls’ Dr. Earl Calcutt Middle School, were selected from among 196 applications. The two school systems oversaw the administration of the application process.

The Pawtucket and Central Falls school systems invited eighth graders to submit applications, including essays. School administrators narrowed the field, and PawSox officials selected the two winners from among the finalists.

“We all know that children are the heartbeat of our community, and that education is the equalizer,” said Pawtucket Mayor Don Grebien. “We are grateful to the PawSox Foundation for providing this opportunity of a college education, and for being such a generous community partner.”

“We are so proud of Charlisa Kollie and all of our Pawtucket students,” said Pawtucket Superintendent Patti DiCenso. “This program can dramatically change the lives of our children. It provides hope-an essential element of a child’s education.”

“All of us in Central Falls owe a debt of gratitude to the PawSox Foundation,” said Central Falls Mayor James Diossa. “This scholarship not only sends a message to Ethan Hoke, it sends a message to all of the children of our community. It says, ‘We believe in you, we support you, and we will do whatever we can to ensure that you acquire a great college education.'”

“Ethan wrote a beautiful essay about his love of Central Falls,” said Central Falls Superintendent Victor Capellan. “At his young age, he demonstrated the wisdom that one good deed begets another. It was touching and inspiring to read his thoughtful words.”

“Only through partnership can an innovative program come to fruition,” Steinberg said. “We thank Mayor Grebien and Mayor Diossa, as well as the School Boards and Superintendents for their extraordinary spirit of cooperation.”